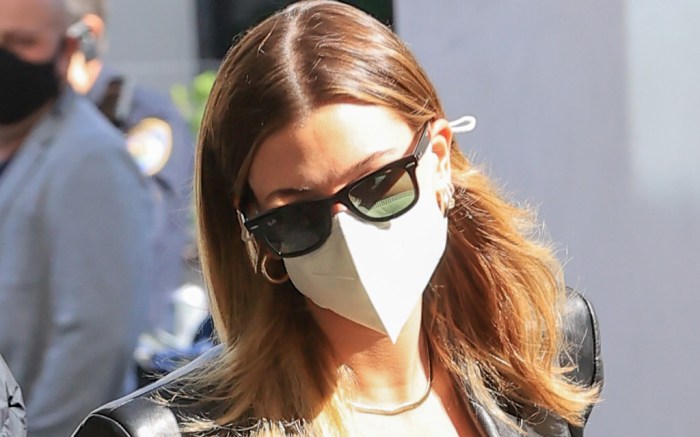 Hailey Baldwin tapped into a particular period of retro style with her latest look in a Los Angeles outing.

The media personality headed to a meeting this afternoon in an outfit that channeled the Greasers of the 1950s and 1960s; the subculture group emerged post World War II and rose to popular acclaim in the public eye thanks to books like The Outsiders, films such as “Grease” and well-known actors including James Dean and Marlon Brando.

Baldwin herself paid homage to the throwback era in a sleek leather blazer, white ruched bustier top and oversize mom jeans with a chunky black belt.

The model’s choice of footwear furthered her retro vibes as she rolled up the hem of her jeans to exposed her ribbed crew socks and sleek shoes. The lace-up brogues highlighted glossy patent leather uppers atop an exposed welt-stitched sole. Coming from Dr. Martens, the low-top 1461 Oxford silhouette came finished with a textured outsole and a retail price of $ at DrMartens.com.

As for Baldwin herself, the model’s experience in the fashion industry extends to all sides. The media personality worked with Levi’s to star in their summer ’20 campaign alongside Jaden Smith and most recently joined the denim brand to help launch its SecondHand upcycling initiative. She has also appeared in marketing campaigns for brands such as Guess, Zadig & Voltaire, Ralph Lauren and Tommy Hilfiger. What’s more, in 2016, the A-lister joined forces with Ugg, starring in the label’s Classic Street Collection campaign for fall ’16.

The daughter of Stephen Baldwin‘s shoe closet also includes an eclectic mix beyond her ambassadorships. On top of her go-to Nike Air Force 1 sneakers, she has been spotted wearing sneakers from Chanel, Off-White and Nike x Fear of God collabs, as well as heels from Tabitha Simmons and Jimmy Choo. The media personality’s new go-to brand for shoes is Bottega Veneta, falling in line with trending celeb-favorite styles from the label that every “it” girl is wearing.

Click through the gallery to find more stars who love their Dr. Martens footwear just like Hailey Baldwin.