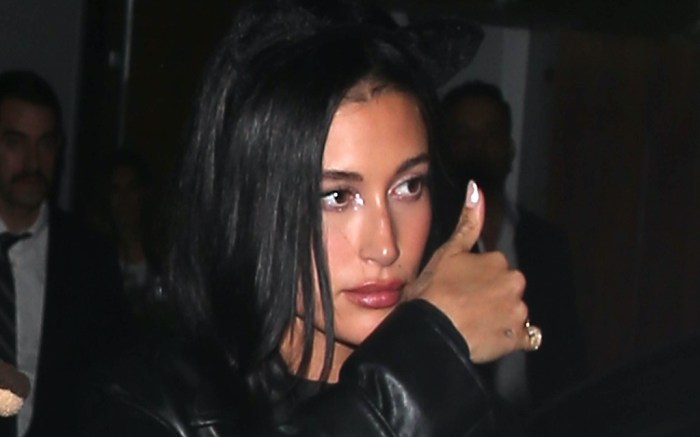 Hailey Baldwin tapped into her edgy side on Saturday while at a Halloween party with Justin Bieber in Hollywood.

The model stepped out for the spookiest night of the year in a sleek all-black outfit. Her look included a black top and slim-fitting pants, as well as a sleek leather coat. Baldwin’s costume was complete with a black wig, creating an outfit reminiscent of punky goth aesthetics. Bieber also wore a playful ensemble, featuring a teddy bear onesie and hood, layered necklaces and a pair of pink and white sneakers.

For footwear, Baldwin gave her look an edge with black ankle boots. The star’s shoes included black leather uppers with front zip details, as well as thick rubber soles. When paired with the rest of her costume, the versatile pair created a monochrome effect that was utterly slick.

Ankle boots are back in shoe rotations, now that fall has officially arrived. The style can be worn in a range of casual and formal outfits to easily elevate a look, thanks to their sharp silhouettes and edgy manner. In addition to Baldwin, Kendall Jenner, Sofia Vergara and Emily Ratajkowski have also worn the style in recent weeks.

Baldwin has been a darling of the fashion industry for quite some time, appearing in campaigns for brands like Guess, Ralph Lauren, Tommy Hilfiger and Zadig & Voltaire. The media personality also starred in Levi’s summer ’20 campaign with Jaden Smith, recently joining the brand to celebrate its annual 501 Day event. Previously, in 2016, Baldwin starred in Ugg’s Classic Street Collection campaign for fall ’16 as well.

The star’s shoe closet includes an eclectic mix of streetwear sneakers and sleek heels. Aside from Superga sneakers, which Baldwin’s been an ambassador for since May, she also wears kicks by Nike, Chanel and Off-White. On the more formal front, the model favors heels from Tabitha Simmons, Jimmy Choo and Balenciaga. Most recently, she’s frequently worn sleek and embellished sandals by Amina Muaddi and the aforementioned Veneta, similarly to the “it” girl beloved styles that are trending in the fashion world right now.

Elevate your fall looks in black boots like Hailey Baldwin.