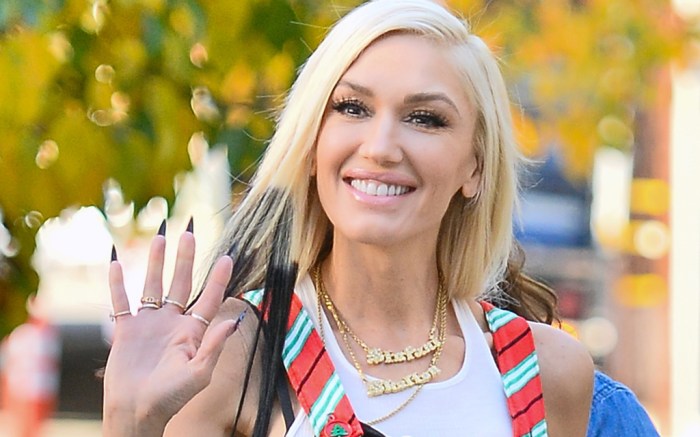 Gwen Stefani continues to debut bold look after look as she promotes her new single, “Let Me Reintroduce Myself.”

Today, the singer hit the stages of the “Today Show” in an outfit that could not be missed; she layered a glittering, graphic sweatsuit over a sequin-coated bralette reading “Whatever” across the font along with her signature fishnet tights. The No Doubt alumna also made sure to include her new favorite necklaces, one reading Stefani and one reading Shelton for her fiancé, country singer Blake Shelton.

As for footwear, Stefani continued the glittering theme of her look in a set of sparkling pink boots set atop a pointed-toe front and a steep stiletto heel.

Surprisingly, pink shoes have become the new norm in Stefani’s closet. You can find the judge of “The Voice” in a mix of Barbie-inspired styles within the past few months alone. In December, for example, she opted for a metallic western-style pair to top off her cowgirl-chic look with Shelton. Then, just a few weeks, earlier, it was a knee-high set of embossed pink boots as she performed her hit single in a buckled-up mini dress.

The tall pointed-toe silhouette came set atop a pointed-toe front with crocodile skin-inspired embossing across the uppers, bearing resemblance to a popular design from Paris Texas. The unmissable boots from the 2019 FNAA recipient of the Emerging Talent Award retailed originally for $598 but can be found for $551 at Farfetch.com.

As for Stefani herself, the singer’s style can be described as punk rock-chic, always including a twist of glam. Whether she’s in Sophia Webster butterfly sandals or Crocs camouflage clogs, the “Sweet Escape” musician knows how to pull off an unexpected style. Her go-to brands include Gucci, Philipp Plein, Vans and more when it comes to footwear.

She also introduced her own line of apparel L.A.M.B. in 2003 and has partnered with L’Oreal, Revlon and Tura GX for campaigns and collaborative collections. Stefani’s career has also extended into the television world with a role judging new musical talent on “The Voice” once more this season alongside her new fiancé Blake Shelton as well as Kelly Clarkson and John Legend.

Wow like Gwen Stefani in these bold pink boots inspired by her statement look.

Click through the gallery to discover more of Gwen Stefani’s wildest style moments over the years.