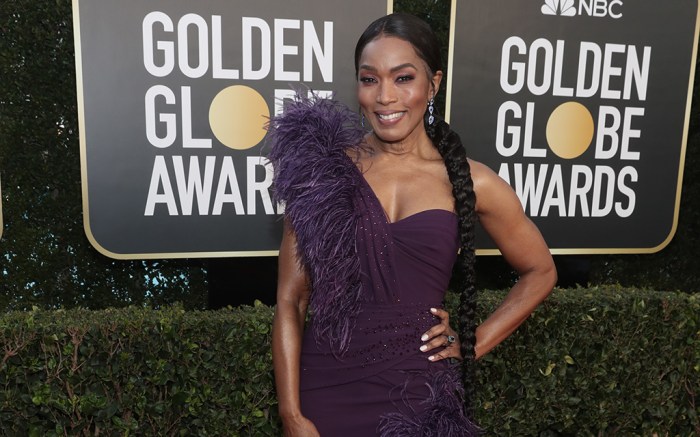 The 2021 Golden Globe Awards has officially kicked off, and your favorite stars are dressed to impress.

While this year’s show is virtual due to the ongoing coronavirus pandemic, celebrities, including Dan Levy, have still suited up in eye-catching looks. For the ceremony, Levy — who is up for Best Supporting Actor for his role in “Schitt’s Creek” —  offered his own take on the monochrome trend in a Valentino look that included a sunny yellow blazer teamed with a vibrant sequin turtleneck and mustard-colored trousers. As for footwear, Levy opted for chunky metallic oxfords. The shoes feature a lace-up closure a thick platform heel.

Angela Bassett, who is presenting during tonight’s show, looked radiant in a plum gown from Dolce & Gabbana that featured feathers at the slit and shoulder. She finalized the ensemble with purple pumps also from the label.

To hit the red carpet, Sarah Hyland fittingly wore a red off-the-shoulder dress from Monique Lhuillier. Although her heels are hidden in the photo, the “Modern Family” star opted for footwear from Jimmy Choo.

Leslie Odom Jr., a first-time Golden Globe nominee, who is up for Best Supporting Actor in a Motion Picture for his portrayal of Sam Cooke in “One Night in Miami,” also leaned on Valentino, wearing a a pink suit. Underneath the ensemble, Odom Jr. styled a vibrant lime green turtleneck with a white button up. As for footwear, the actor and singer sported platform brogues.

Amanda Seyfried looked like a fresh bouquet as she wore a peachy mermaid gown that featured a soft petal arrangement around her arms. Her dainty look is from Oscar de la Renta.

Kaley Cuoco also dressed in Oscar de la Renta, wearing a star-embellished sleeveless dress from the fashion house. Cuoco is up for Best Actress in a Musical or Comedy TV Series for her role in the “Flight Attendant.”