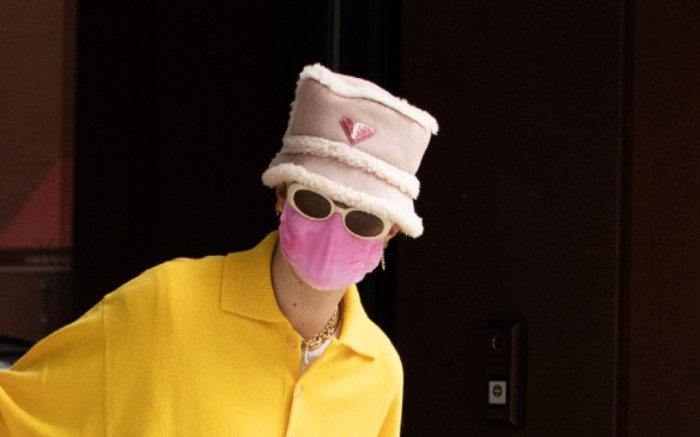 Gigi Hadid is continuing her streak of cozy looks.

On Thursday, Hadid stepped out for a stroll with her baby daughter Khai in New York City, wearing a vibrant yellow sweater set. The look featured a collared sweater and coordinating yellow drawstring pants. Hadid continued the cozy theme with a fur-lined hat from Prada. She then accessorized with white sunglasses.

As for footwear, Hadid opted for bold red sneakers, giving the look a color blocking effect. In addition to red, the sneakers featured contrasting black paneling and laces. The shoes were finalized with a white outsole.

Hadid has been showcasing a plethora of loungewear looks while out on walks with her newborn, whom she welcomed in September with boyfriend and singer Zayn Malik.

On Wednesday, Hadid stayed casual in the softest looking gray set, which included a button up and sweatpants. She gave the look an upgrade with a pair of silver metallic sneakers. The shoes featured shiny uppers and sat atop a chunky midsole.

Then on Monday, Hadid was seen in a cozy gray cardigan teamed with coordinating wide leg sweater pants. Hadid accessorized with gold necklaces and rounded sunglasses. The star also wore a gray face mask to match her look amid the ongoing coronavirus pandemic.

As for footwear, Hadid opted to give her comfy set an upgrade with a pair of sleek black boots from Vagabond Shoemakers. Called the Gabi Boots, the leather shoes feature a pointed toe and a sturdy block heel.

Over the last year, loungewear has become a must-have aesthetic as people lean on more comfortable attire while working remotely and isolating. Fashionistas like Hadid have found ways, however, to make loungewear just as exciting with fun footwear.

When Hadid is walking the streets of New York with her baby, she can be seen on the runway for the biggest names of fashion. March was a big month for Hadid as she made her return to the catwalk for Versace’s fall ’21 ready-to-wear pre-recorded show. Hadid has also previously starred in campaigns for Tom Ford, Burberry and Chanel.