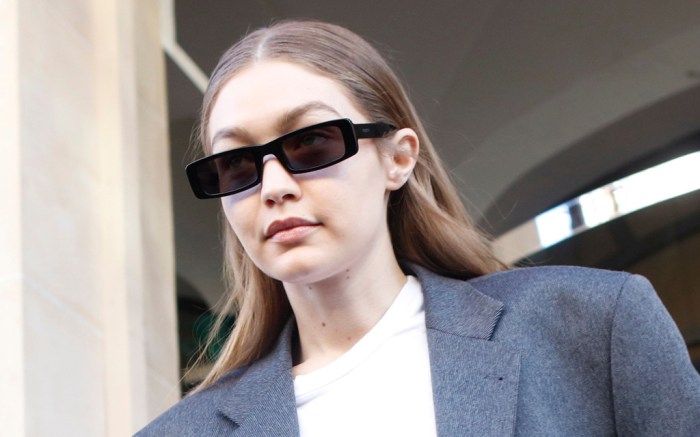 Gigi Hadid may be a new mom but she just gave dad-chic style a run for its money.

The model took to Instagram Stories last night to show off her uber-chic outfit of the evening, posing for a mirror selfie in a classic tuxedo with the caption, “Whose dad?!” Complete with a mini bowtie, black cummerbund and high-collared top, the outfit layered in a perfectly oversize coat and tapped into the growing suit trend up this season.

Suiting up has become the new normal amongst celebrity style trends thus far, potentially led in part by the first-ever female Vice President Kamala Harris and her neverending lineup of perfectly tailored power suits. Since the 1960s, the tuxedo itself has made its way into womenswear trends, offering an elegant way to blur the lines between femininity and masculinity in the world of style.

Since making her return to the modeling world post the birth of her and Zayn Malik’s daughter Khai, the older Hadid sister wasted no time in getting back into the game with a little help from fashion’s biggest names.

Earlier this week, for example, the 25-year-old gave a behind-the-scenes look at her shoot for Jacquemus. The outfit from the buzzy French label included a white asymmetrical crop top teamed with coordinating high-rise pants.

When it comes to trends, Gigi herself tends to be on the breaking cusp of everything hot and in. Hadid previously starred in campaigns for the biggest names in fashion, from Versace to Tom Ford and Burberry and even Chanel, too. The supermodel has walked runways in every season for the past few years in both womenswear and menswear collections, modeling cozy looks for Marni and wild designs for Jeremy Scott.

Click through the gallery to discover even more of Gigi Hadid’s best looks over the years.