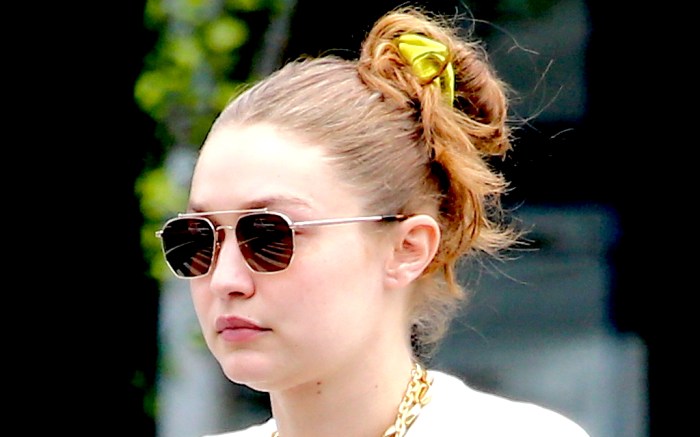 For a stroll in the city with her daughter Khai and friend Alana O’Herlihy, the model wore a chic white T-shirt tucked into a pair of high-waisted white jeans. Hadid’s pants featured silver sequins placed in the shapes of diamonds throughout, adding major glamour to her casual ensemble. The outfit was accessorized with several chunky rings — one blue, one orange, and one crafted to look like a strawberry — and two layered gold necklaces. Hadid further accessorized with a pair of Vehla Eyewear’s brown Bowie sunglasses with thin gold metal frames, and kept her hair up with a lime green scrunchie.


The Versace model chose a pair of white sneakers for her casual walk, which she paired with a set of olive green socks. Hadid’s Dual Court kicks hailed from Reebok’s collaboration with Victoria Beckham, featuring leather uppers with cream leather accents and a yellow line around their laces. The pair’s coordinating colors created a sharp monochrome effect with the rest of Hadid’s outfit, making it streamlined and chic. Though Hadid’s original sneakers are currently out of stock, a similarly colored Club C pair from the same Reebok x Victoria Beckham line retails for $200 on Reebok.com.

White sneakers have become a staple in A-list stars’ wardrobes this season, like Vanessa Hudgens, Addison Rae, and Jennifer Lopez. High and low-top pairs by a range of brands both independent and established have gained traction from their versatile tones and relaxed nature, easily being paired with casual and dressier ensembles. In particular, Nike’s Air Force 1 sneakers have become a hot commodity in the footwear world from their retro aesthetic, worn by everyone from Hailey Baldwin to Yara Shahidi.

Hadid’s shoe choices typically veer on the casual side. She frequently wears sneakers by Nike and Puma as well as Reebok, which she collaborated with on a capsule collection in 2018. Slides are one of her longtime favorites, which she’s worn from brands like Adidas, Ugg and Alexander Wang. However, Hadid’s also known for wearing show-stopping heels, especially pointed-toe pumps, boots, and strappy sandals by Stuart Weitzman, Christian Louboutin and Giuseppe Zanotti for formal occasions.

This year has been an impressive one so far for the Maybelline muse, who’s been learning the joys of parenting with her daughter Khai. The model opened and closed Versace’s fall 2021 show earlier this spring — her first since giving birth — and appeared on the cover of the March issue of “Vogue.” We’re already looking forward to seeing her return to runways worldwide when Fashion Month resumes this September.