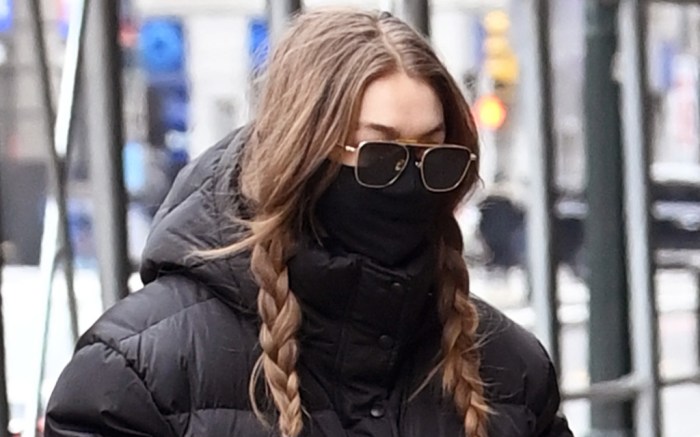 Gigi Hadid brought her effortlessly chic off-duty style to the streets of New York today as she ran errands with her daughter.

The supermodel stopped by a few stores in the city this afternoon as she pushed a stroller carrying her newborn daughter whom she shares with singer Zayn Malik. For the outing, Hadid went for monochrome attire, laying a black puffer jacket over high-rise leggings and a coordinating face mask.

The real kicker of the 25-year-old’s ensemble was her choice of footwear. Adding a hit of color to the look was none other than Nike’s memorable collaboration with the late NBA legend, Kobe Byrant. The Nike Kobe 6 “Grinch” first hit shelves in 2010 after the Lakers took on the Miami Heat in a Christmas Day matchup; the colorful design combines Green Apple and Volt uppers with a textured snakeskin finish in honor of Bryant’s Mamba notoriety.

Ten years after its original drop, Nike rereleased the design in December 2020 with a Proto twist, meaning the style experienced modern upgrades like updated Zoom Air cushioning and an improved traction system. The design came with a $190 asking price but for lucky stars like Hadid herself, the shoes came as an early holiday gift from Bryant’s wife Vanessa.

When it comes to trends, Gigi tends to be on the breaking cusp of everything hot and in. Hadid previously starred in campaigns for the biggest names in fashion, from Versace to Tom Ford and Burberry and even Chanel, too. She has walked runways in every season for the past few years in both womenswear and menswear collections, modeling cozy looks for Marni and wild designs for Jeremy Scott.

If you missed out on the Nike Kobe 6 Proto drop, you can still get Gigi Hadid’s bright style with these next pairs.

Click through the gallery to discover more of Gigi Hadid’s chic street style moments over the years.