Gigi Hadid Makes The Case For Her Go-To Dr. Martens Boots In This Buzzy Hue 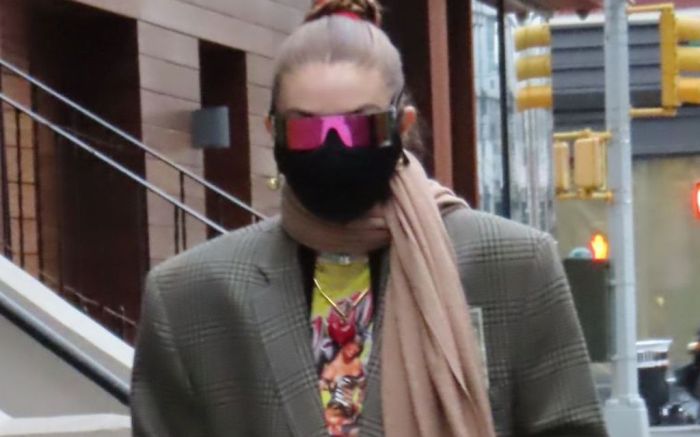 To welcome in the weekend yesterday, Gigi Hadid celebrated her partner, Zayn Malik’s “Nobody Is Listening” debut with their newborn daughter, and further confirmed her affinity for brown combat boots.

While outside her NoHo apartment, the supermodel wore a neutral blazer with a U.S. bill patchwork detail on one side of the chest. She layered the whimsical outwear piece with a Jeremy Scott Cosmic Girl graphic tee shirt in a vibrant yellow colorway and teamed them with a pair of shredded knee straight-leg jeans in a light-wash denim. The Arsy Dollar Bill Blazer from 3.Paradis in a checked print. and her jeans appear strikingly similar to the Agolde ’90s Fit Mid-Rise Loose Fit Jeans, which retail for $188 on shopbop.com.

The 25-year-old accessorized her look with Moschino sunglasses and her go-to Masqd Ultra Sport Face Mask in the black colorway.

For footwear, Hadid polished the ensemble with her beloved Dr. Martens 1460 8-Eye Lace-Up Boots in the Aztec colorway. These shoes retail for $150 and are available for purchase on shopbop.com.

In December, the 25-year-old was spotted in these same boots while out for some mother-daughter shopping time in her New York City neighborhood and styled them with a camel-hued duster coat from Thom Browne and a coordinating $1,110 shearling monogrammed hat from Louis Vuitton. During the same week, she also wore a pair of now sold-out Dr. Martens Geordin boots out in the snow, teamed with her beloved maxi-length black coat.

Embrace this buzzy shoe trend with these combat boot styles available below.