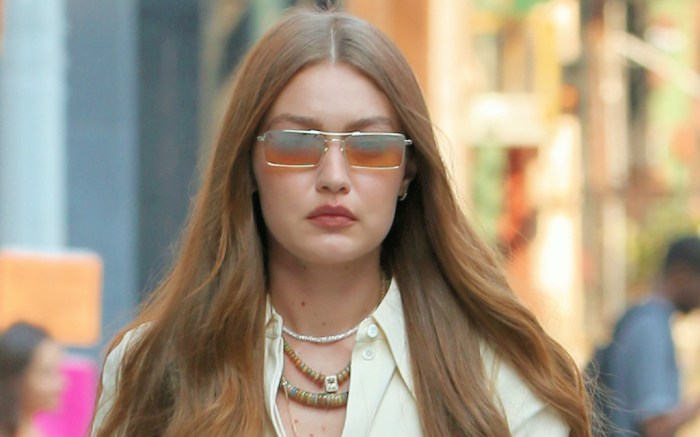 
Hadid paired the pieces with several beaded necklaces in green, silve, and beige tones, as well as a gold pendant necklace. She completed her ensemble with gold rings and a pair of rectangular sunglasses with orange lenses.

On the footwear front, the Versace muse slipped on a pair of beige leather Bottega Veneta Madame pumps. The shoes featured a sculpted heel and pointed toe reminiscent of pairs worn by Marie Antoinette, with elasticated backs for easy wear. They also boasted chunky gold hardware for a sleek finish. Hadid’s pumps retail for $990 on Farfetch.com.


Bottega Veneta has been the go-to brand for it-girl beloved shoes and handbags over the last several years, due to its’ makeover by creative director Daniel Lee. Viral styles like the Lido, Curve and Intrecciato sandals, as well as the brand’s colorful mules and mesh pumps, have become staples in the wardrobes of fashionistas like Rihanna, Kim Kardashian, and Rosie Huntington-Whiteley.

Hadid’s shoe choices typically veer on the casual side. She frequently wears sneakers by Nike, Puma and Reebok, which she collaborated with on a capsule collection in 2018. Slides are one of her longtime favorites, which she’s worn from brands like Adidas, Ugg and Alexander Wang. However, Hadid’s also known for wearing show-stopping heels, especially pointed-toe pumps, boots, and strappy sandals by Stuart Weitzman, Christian Louboutin and Giuseppe Zanotti for formal occasions.

This year has been an impressive one so far for the Maybelline muse, who’s been learning the joys of parenting with her daughter Khai. The model opened and closed Versace’s fall 2021 show earlier this spring — her first since giving birth — and appeared on the cover of the March issue of “Vogue.” We’re already looking forward to seeing her return to runways worldwide when Fashion Month resumes this September.