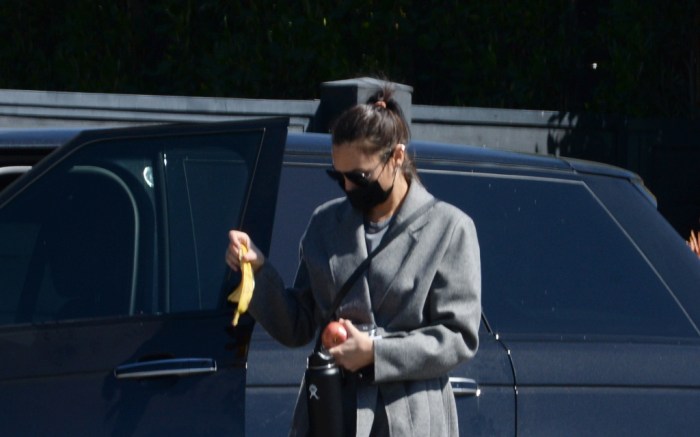 Congratulations are in order for Gal Gadot as she is expecting her third child with husband Jaron Varsano.

Following the pregnancy announcement, Gadot showcased her cozy maternity style while out in Los Angeles on Tuesday. The “Wonder Woman 1984” star looked warm and comfy in a gray wrap coat that featured a tie at the waist. Mango offers a similar style for $200 at the brand’s website. Gadot’s outerwear piece is not only cozy, but also trendy as it comes in one of this year’s buzziest colors. Pantone announced that the 2021 Color of the Year as Illuminating and Ultimate Gray.

Gadot teamed the coat with a pair of off-white wide-leg denim — another must-have wardrobe essential this season. As for footwear, the actress kept her feet snug in a pair of Ugg Classic Short Boots in black.

The pull-on shoes feature water-resistant suede uppers with a wool lining and round toe. In addition to Gadot, the brand is beloved by celebs, including: Kendall Jenner, Kaia Gerber, Ariel Winter and more.

Gadot’s relaxed look comes after she sported a more dressed up ensemble for the Golden Globe Awards on Sunday. To present an award, Gadot opted for a whimsical white tunic dress. The mini frock featured flowy sheer sleeves and a turtleneck construction. Gadot gave the look an Old Hollywood effect, styling her hair in retro waves and completing her glam with a bold red lip. On her feet, Gadot opted for sparkly sandal heels. The footwear featured a single strap across the toe and around the ankle and sat atop a stiletto heel.

For red carpet events, Gadot is known to make a statement with gowns that consist of sequins, lace, and sheer. She also likes to sport sleek suiting and cutout looks in bold colors. The star often teams the looks with strappy sandals from labels like Christian Louboutin, Gianvito Rossi and even Aldo.