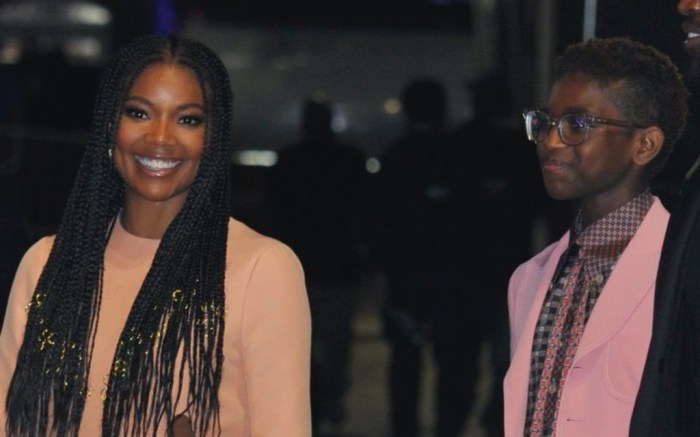 Gabrielle Union and daughter Zaya Wade made a sharply suited pair at home this week. The duo were also joined by Union’s youngest daughter, Kaavia, making the moment a true family affair.

Union posed alongside her daughter in an oversized taupe blazer, as well as a white top and dark brown pants. Her look was accented with a gold necklace and white Valentino handbag.

Wade also donned a sleek suiting look, composed of a dark gray vest and pleated trousers by Tory Burch. Her look, also layered over a white top and gold necklace, was finished with a black leather Burberry handbag.

The duo further complemented each other in neutral square-toed boots, making their photo a lesson in outfit coordination. Union wore a pair of white leather boots, featuring angular heels that appeared to total at least 2 inches in height. Wade gave her outfit a preppy twist with Tory Burch’s Equestrian Link boots, which featured black and cream leather uppers with gold horsebit accents and 3.4-inch block heels. Wade’s boots retail for $458 on ToryBurch.com.

Wade, a new star on the fashion scene, often coordinates her looks on red carpet and videos with mom Union. The pair has proven their adaptability to complement each other’s looks, whether they’re swapping Prada outfits on TikTok or sitting front-row at Gucci’s Love Parade show. For footwear, Wade often wears block-heeled sandals, pumps and boots from the likes of Burberry and Gucci.