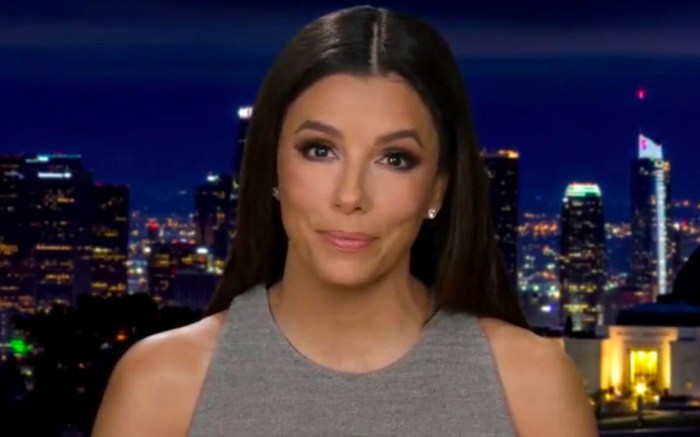 Eva Longoria made a special appearance during the “Celebrating America” special tonight following the inauguration of Joe Biden as the 46th president of the United States.

The actress appeared on screens across the country and the world in a comfy-chic gray dress and pearl earrings as she helped honor the new president and Vice President Kamala Harris. The relaxed ensemble offered a twist on relaxed trends that overtook the world of fashion in 2020.

Silky styles and pajama-inspired loungewear is now the new normal when it comes to celebrity style. Amidst the current health crisis, the industry turned towards clothing that provides a sense of comfort and stability with ease of wear; that includes everything from biker shorts and hoodies to soft pieces like Longoria’s pick. In regards to footwear, there has been an increased appreciation for sneakers and 1990s-style silhouettes — think thong sandals and chunky platforms — as celebrities and fans alike look for familiarity in their shoes.

The “Desperate Housewives” alumna has been involved in events for the Democratic party throughout the 2020 elections, also hosting one of the nights of the Democratic National Convention in August.

Click through the gallery to discover more major moments from the 2021 Presidential Inauguration Day events.