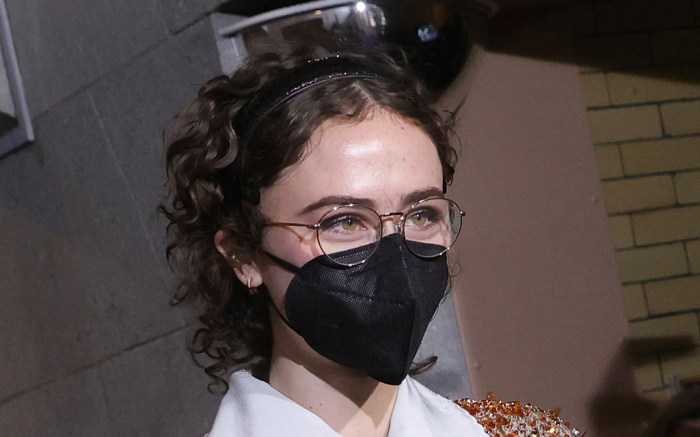 At Vice President Kamala Harris’ inauguration ceremony today, it was her stepchildren that unexpectedly stole the show.

Ella and Cole Emhoff, children of Kamala Harris’ husband Doug Emhoff from his previous marriage to ex-wife Kerstin Emhoff, arrived at today’s ceremony in sharp looks. While Cole opted for a layered ensemble with a suit, striped tie and warm coat, Ella opted for a bolder outerwear design courtesy of Miu Miu worn over a deep burgundy dress.

The Shetland Pied De Poule coat from the Italian brand came with embellished detail and a signature Miu Miu collar; she also accented the number with a $75 Loeffler Randall headband, available on the brand’s website.

For footwear, the Parsons textile design student opted for a sleek set of black booties; the patent leather design came set atop a block heel, keeping her feet warm in the snowy weather.

Ella’s stepmother and father too chose powerful ensembles for their inauguration day looks.  For the event, Kamala opted for a bright blue look courtesy of Christopher John Rogers, a Black-owned fashion brand. Also wearing a Pyer Moss custom coat during events last night, the politician is starting her own style streak by tapping Black designers and independent American labels for her collection of official attire. Her signature pearls as well come from a local name, Wilfredo Rosado, a Latino jewelry designer based in New York.

Click through the gallery to discover more major moments from the 2021 Presidential Inauguration.