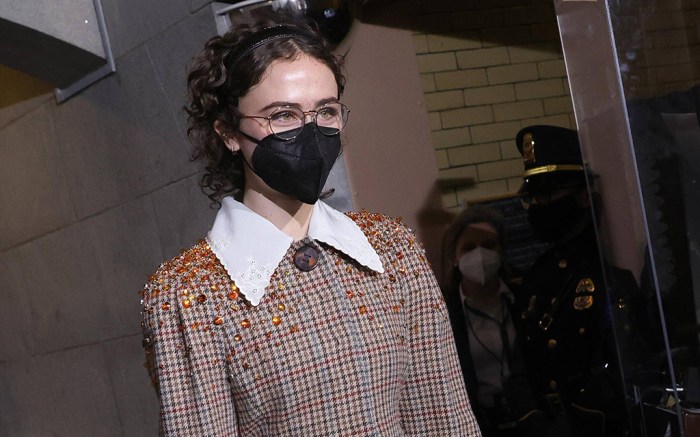 Among the many fashion statements made at the Capitol during yesterday’s inauguration ceremony, Vice President Kamala Harris’ stepdaughter, Ella Emhoff, was hands down one of the event’s breakout stars.

Dubbed by the Internet already as “the First Daughter of Bushwick” the 21-year-old design student’s eclectic style is a refreshing take in Washington’s otherwise conservative fashion landscape. Ella, who is the daughter of Kamala Harris’ husband Doug Emhoff from his previous marriage to ex-wife Kerstin Emhoff, wore a series of standout outfits during her visit to D.C. this week.

On Tuesday, during a visit to the Lincoln Memorial, the Brooklyn-based textile designer wore a Thom Browne skirt suit and a double-breasted overcoat, complete with a blue oxford and a striped tie. For Wednesday, Emhoff opted for a crystal-embellished Miu Miu coat that was worn over a burgundy prairie dress designed by Batsheva Hay, a Jewish designer based in New York City who is known for the signature style.

Emhoff topped off the look with a now sold out $75 Loeffler Randall headband nestled in her natural curls, John Lennon glasses and a pair of chunky black boots. Her soft yet androgynous style gives a dose of Gen Z’s standout style to the Capitol. There’s no doubt that the second daughter’s playful fashion sense will continue to turn heads and set the Internet abuzz.

i have to stan ella emhoff, style icon pic.twitter.com/kknwBqfHfX

Aside from Emhoff’s icon-status style, she also makes clothing and accessories herself. Although her site is currently down and is closed for commissions, the Brooklyn-based student also crafts her own knitwear creations.

Several other family members of Vice President Harris taken up by the Internet for their inaugural style choices include her nephew-in-law Nikolas Ajagu, in his $21,000 Dior Air Jordans.

His wife, Meena Harris also turned heads in her vibrant green dress and rhinestone-embellished boots. And their daughters, Amara and Leela, won the hearts of spectators in their fuzzy leopard coats and Dr. Marten boots, which was meant to pay tribute to their “Auntie,” Vice President Harris.

As the world ushers in a new family to take over the White House, Vice President Harris’ entire family will no doubt leave their mark.

Emhoff, in particular, is one to watch, not only in terms of her personal style but perhaps in the design world as well. In the four years to come, the second daughter will continue to use her personal style to make her mark on Washington, D.C., and perhaps take her knitwear to new heights.

We can’t wait to see what’s next for D.C.’s newest style star.

Want more? Click through our gallery of All the Major Moments From Inauguration Day 2021.