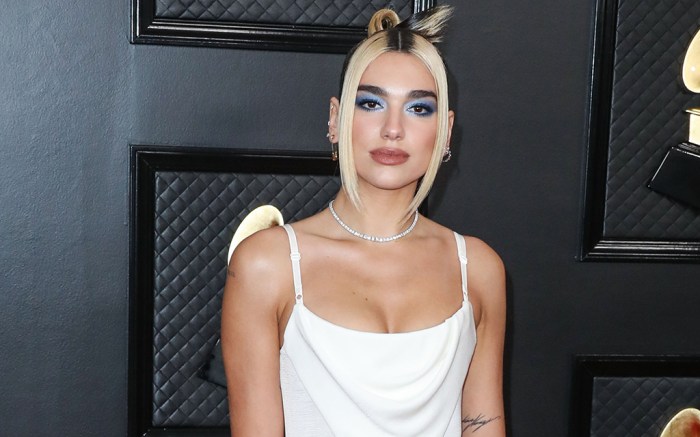 Shot by Dave LaChapelle, the pop star is featured throughout the issue in a series of high-fashion looks that include a barely-there mesh bodysuit, tights and gloves by Rui Zhou.

In the February feature story, written by Alex Morris, Lipa talks about her latest album “Future Nostalgia,” which was released in March 2020. The album has earned her the title of “breakout pop star of the pandemic era.”

For @DUALIPA — the breakout pop star of the pandemic era — the past nine months have been a study in how to not lose momentum when the world is pressing pause. https://t.co/yLiGFzgf3T pic.twitter.com/V8o39HhfMn

In addition to her female-empowering music and catchy tunes, the songstress has become a style icon thanks to her vibrant off-duty looks. Lipa tends to gravitate towards eye-catching outfits like a slinky dress with cut-outs and a full-patterned head-to-toe outfit from the Richard Quinn x Moncler Genius collab.

For the star’s Rolling Stone feature, other standout looks include Lipa barefoot in a Marc Jacobs dress as well as moments in Paco Rabanne and Thierry Mugler.

Despite the unexpected downtime of COVID-19, Lipa has kept busy with appearances and performances, including a stint on “Saturday Night Live.” When she’s off duty, the songstress spends time with her boyfriend, model Anwar Hadid, and his siblings, Gigi and Bella.

When it comes to footwear, Lipa gravitates towards statement shoes like her favorite chunky Prada sneakers. The tread sole style is not only edgy but is functional and comfortable.

Lipa’s favorite style retails for $890 on Modaoperandi.com but all colorways, including the pop star’s black version of the shoe, are all nearly sold out.

Luckily for you, there are several brands that carry similar chunky styles that feature the durable, statement-making treaded lug sole. The bold style was big in 2020 and no doubt will translate into the new year. Shop our picks below.