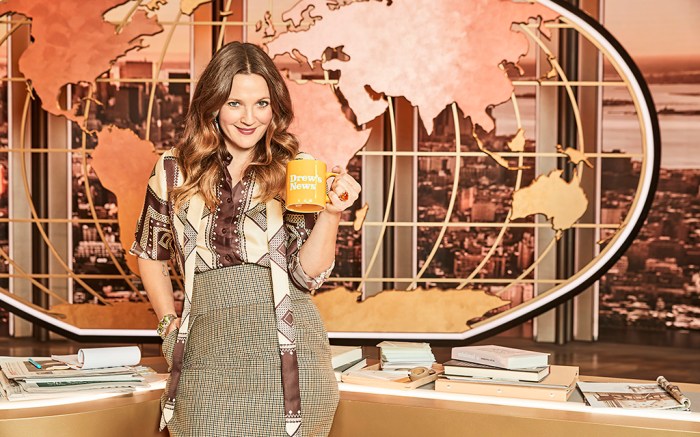 It’s 9 a.m. and when I turn on the TV in early September a sense of nostalgia washes over me. Drew Barrymore is front and center. I’m not watching “E.T.” “The Wedding Singer” or “50 First Dates,” it’s the actress herself, in the flesh, as she debuts her morning talk show, “The Drew Barrymore Show.”

To describe the show would be to say it feels like a hug, as cheesy as that may be. Barrymore is joyful, smiling and playful during a year when warmth and positivity is needed most. Plus, she’s candid and seems to be at her truest self as she holds back tears while interviewing her first-ever guests, fellow “Charlie’s Angels” and “partners in crime and life” Lucy Liu and Cameron Diaz.

It’s clear she is not playing a role in her latest venture and part of that authenticity comes from her clothing.

“We wanted to do something completely different that was more like Drew’s style that was very inherent in just the way she lives and in the way she operates,” the show’s stylist Lee Harris told FN. “We’re not creating some type of character.”

“We both are children of the ’70s and have a soft spot for that era. We just kind of enjoyed the pastiche of collecting the pieces that are completely contemporary, nothing is vintage, and recreating that moment of time that we both hold so dear.”

Plus, one of Barrymore’s costumes from early-2000s “Charlie’s Angels,” featuring flared jeans, a velvet vest, blazer and necktie, was a template for her talk-show host style, according to Harris, who has been working with Barrymore since that time.

What also set the tone for this curated closet was a pair of Jimmy Choo boots Barrymore had in her own wardrobe from 2016. Harris described the shoe as the perfect boot — a platform made in suede with a slim ankle and skinny heel.

“Those boots really were so integral in establishing the grounding look of our show because all those culotte looks, you can’t do it without those shoes,” said Harris.

The stylist explained that before the series launched, he went to Jimmy Choo asking for the style to be remade in a variety of different colors and the company obliged. “I will be forever grateful to Jimmy Choo. Nothing would really look the same if we didn’t have those. It just kind of elevates the look into a different era and a whole different mood.”

For Barrymore and Harris, the show’s fashion is another layer of enjoyment and visual participation that the audience can engage in. After every episode, “The Drew Barrymore Show” Instagram account spotlights her ensemble, breaking down each piece and then offers accessible options for the viewers to shop.

Aside from Jimmy Choo, Barrymore can be seen wearing Saint Laurent lace-up boots as well as styles by Miu Miu and Gianvito Rossi. Nearly every shoe will have a platform as it’s the star’s go-to silhouette. Don’t be surprised to see the same pair on Barrymore as recycling looks is part of Harris’ creative exercise, too.

“The whole concept of just wearing something once is kind of passé,” he explained. “I don’t think that’s a modern way of thinking about how to dress, and it certainly isn’t approachable to the average person. So I like the idea of of reworking things and repeating things.”

Harris added, “My main goal is not to follow trends. It’s mostly to make her feel comfortable, find clothes that are flattering on her and to stay within an our vibe that we’ve established. Fashion is such a hard business and there’s a lot of people telling you to do a lot of different things. And so you really have to remain true to your vision. That’s what we’re doing here. We’re trying do our own thing and not try to be what other people want it to be or what we see in other places.”

While it’s cliché to say Barrymore is “just like us,” it’s true. She fangirls over her famous guests, gets stood up on dates and sometimes squeezes into pants that just don’t fit.

“Let me keep it real with you… I guess I have been eating my stress lately,” she posted on Instagram. “For anyone who has to put an extender on your pants, just know I feel ya.”

To see Drew Barrymore’s street style evolution through the years, click through the gallery.