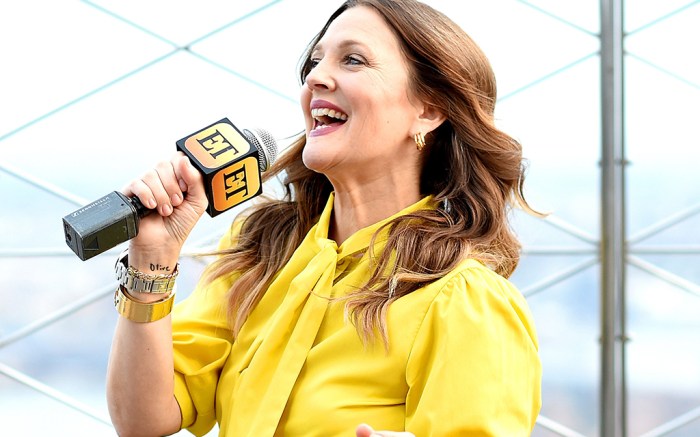 Drew Barrymore channeled her inner New York City hustle yesterday on the streets while juggling her iPad and a bottle of Coca-Cola in one hand.

The actress was spotted dressed in a cozy combo of a navy puffer and pink tie-dye sweats. She topped off the look with a camo face mask and a pair of shearling lace-up boots.

“The Drew Barrymore Show” host has been hard at work as the frontwoman for her new talk show that premiered in September on CBS. Last month, FN talked to the show’s stylist, Lee Harris, about Barrymore’s wardrobe for the show.

“We wanted to do something completely different that was more like Drew’s style that was very inherent in just the way she lives and in the way she operates,” Harris said. “We’re not creating some type of character.”

On set, the “Charlie’s Angel” star can be spotted in ’70s-influenced frocks and heeled boots. Most notably is her collection of suede boots from Jimmy Choo, which was modeled after a pair she had in her own closet from 2016. The platform boot featuring a skinny heel has become an on-air staple for the star.

Cozy hikers and boots are a popular footwear style, especially in the ongoing winter months. The comfort footwear category continues to accelerate as many stay at home to adhere to the pandemic’s social distancing restrictions.

Below, here are a few styles similar to Barrymore’s latest off-duty look you can shop now.

Want more? Click through our gallery of Drew Barrymore’s Street Style Evolution Through the Years.