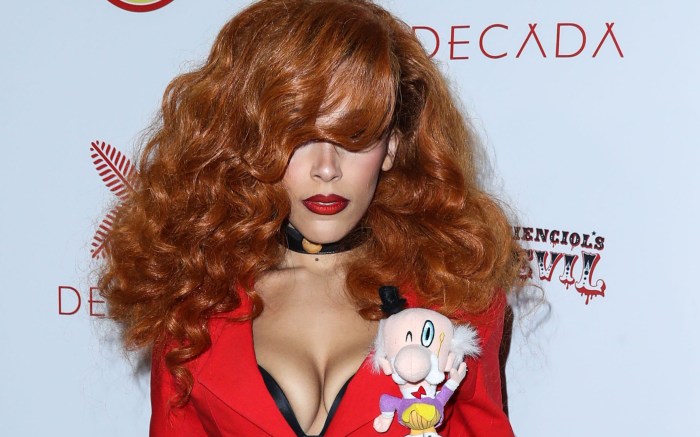 Doja Cat made an arrival that was hard to miss in a red suit and towering platforms last night at the CarnEvil Halloween party in Los Angeles. The star-studded event was attended by the likes of Bia,Victoria Justice and many more.

The risk-taking singer dressed up as the character Miss Bellum from the animated series “The PowerPuff Girls.” Doja Cat mimicked the cartoon character’s iconic look with a plunging belted red suit, a long, wavy red wig, ultra-high black platform heels and a doll as a replacement boutonnière. The outfit was a perfect combination of camp-esque styling mixed in with a modern fashion aesthetic.

This is not the first time Doja Cat has drawn inspiration from pop culture or from a “camp” perspective. Just recently, Doja Cat dressed up as Princess Kida from the animated film “Atlantis: The Lost Empire” or her alien-inspired looks from the Planet Her music videos.

The singer-songwriter has been known for wearing shoes that would easily challenge anyone with a fear of heights; from 6-inch heels to sky-high platforms, Doja Cat is definitely a fan of standing out in a crowd. However, just as much as she is a fan of more daring footwear choices, she’s also been known to embrace some more low-key choices, like Naked Wolfe’s chunky sneakers or Bottega Veneta sandals.

Doja Cat is always pushing the boundaries in fashion; whether she’s wearing a classically feminine dress with a twist or when she has a chair on her head a la 2021 MTV VMAs.

See more of Doja Cat’s style through the years.