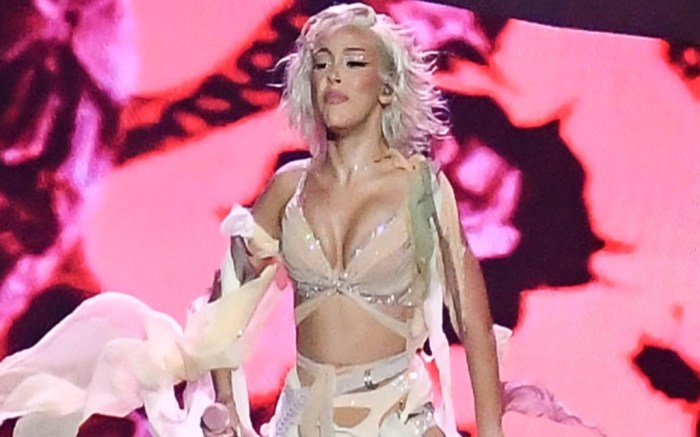 The “Woman” singer took the stage in a bold cutout outfit. Doja’s ensemble featured a pale peach bra top with sparkly silver trim, which featured flowing fabric strips to create side cutouts and rippling accents — reminiscent of early 2000s style. The remainder of her outfit was composed of varying strips of gauzy fabric in green, peach, brown and purple hues to create an allover cutout appearance.

For footwear, the “Planet Her” musician wore a pair of chunky boots. Her shoes included pale gray uppers in a lace-up silhouette. They also appeared to feature as well as thick platform soles that totaled at least 3 inches in height.

When it comes to shoes, there’s seemingly no style or height that Doja Cat hasn’t worn. The singer often coordinates her footwear with her avant-garde outfits, wearing platform sandals by Christian Louboutin, D’Accori, Le Silla and other top brands on the red carpet. When off-duty, she can be spotted in Naked Wolfe’s chunky sneakers, as well as Bottega Veneta sandals. The star has also dipped her toes into the world of collaborations, having released two fashion collections with PrettyLittleThing.

Click through the gallery to see Doja Cat’s most daring looks over the years.