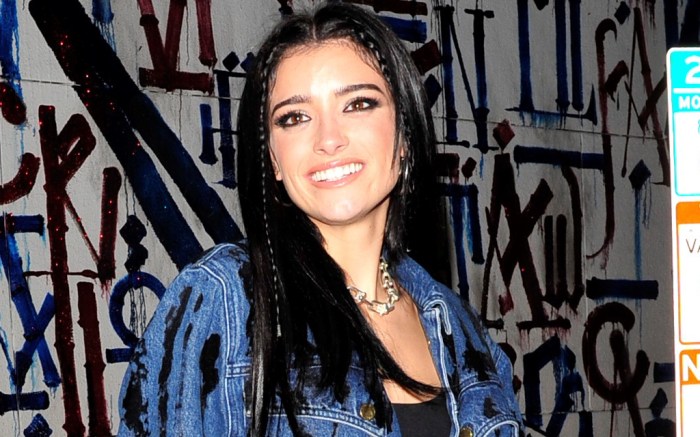 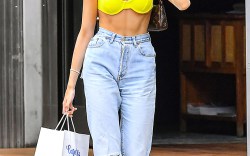 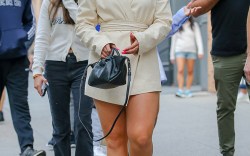 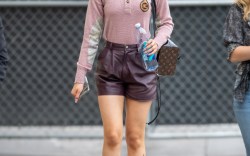 While heading to Craig’s for dinner in West Hollywood last night, the TikTok star wore a pair of classic blue denim jeans and a matching jacket. Both pieces featured a linear black tie-dye print, paired over a black crop top.

D’Amelio paired her punky ensemble with a sleek pair of Prada’s black leather penny loafers. Her pair featured a thick sole and rounded toes — reminiscent of their academic roots — as well as the brand’s sharp metal triangle logos on both vamp straps. The shoes added an air of effortlessness to D’Amelio’s look, with their contrast of preppy and edgy aesthetics. Her loafers retail for $925 on SaksFifthAvenue.com.


D’Amelio’s loafers are one of the most popular shoes of the season, thanks to a renewed interest in the ’90s and early 2000’s aesthetics. The Prada style has become a go-to shoe for fashionable stars like Bella Hadid and Hailey Baldwin. They can also be seen on Instagram feeds everywhere, worn by influencers like Viktoria Rader, Pernille Teisbaek and Emili Sindlev.

D’Amelio’s fashion prowess has risen since she became famous on TikTok in 2019. Most recently, she was spotted at the ESPYs in a sequined Balmain dress paired with Giuseppe Zanotti sandals. The dancer and influencer has collaborated with a variety of brands with her sister Charli D’Amelio, creating campaigns and limited-edition products with Morphe Makeup, Dunkin’ Donuts, Hulu, and more. D’Amelio also starred in Hollister’s viral “Jeans Lab” campaign, and launched a clothing collection, Social Tourist, at the brand with Charli earlier this spring.

When it comes to shoes, D’Amelio typically keeps it casual. Her rotation often features numerous pairs of sneakers by Nike and Vans, as well as Princess Polly boots. For more formal occasions or events, she prefers sparkling and metallic platform sandals and pointed-toe pumps by labels like Zanotti, Stuart Weitzman, Mach & Mach, and Versace, as well as flats by Valentino.