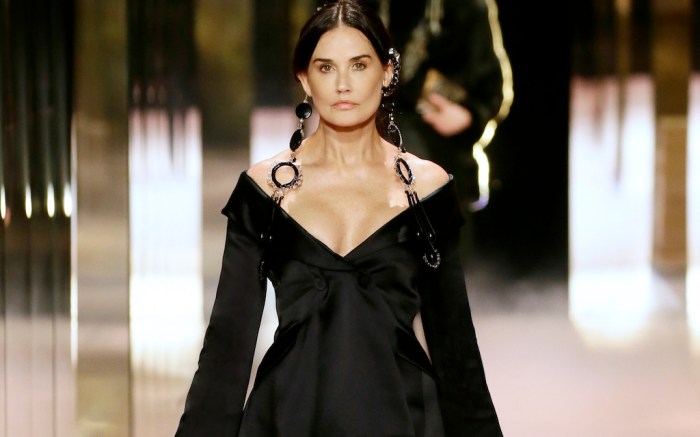 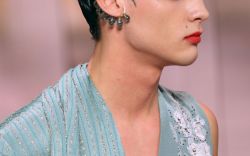 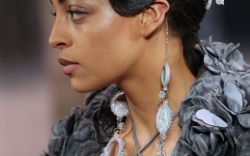 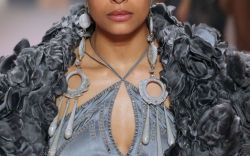 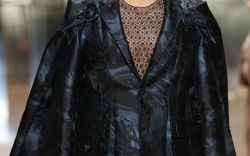 Moore stepped out in a satin draped, tailored suit in a midnight blue colorway. The structured top featured an open, off-the-shoulder V-neckline with a twisted detail along the chest, long sleeves and a draped hem. It was styled with a pair of tailored straight-leg trousers. The runway look was accessorized with the luxury label’s jeweled book clutch, black chain-link earrings, which cascaded down past the shoulders and handed beaded boots.

“Fulfilling a teenage dream…”Thank you @mrkimjones for having me open the @Fendi SS21 show and congratulations on a beautiful and magical debut!” Moore captioned an Instagram post to reflecting on the experience.

Jones drew inspiration from the Bloomsbury Group and infused concepts from the British literary movement into the Italian brand’s heritage codes. Elements from the Charleston farmhouse, the group’s Sussex home, were prominent in the footwear styles created for the collection. These silhouettes included intricately beaded boots and hand-painted heels.

The actress’ cameo was joined by other prominent industry figures, including supermodels Kate Moss and her daughter, Lila Moss, Cara Delevingne, Naomi Campbell, Adowa Aboah and Bella Hadid. The mother-daughter modeling duo revealed Jones’ silver heels and a pair of knee-high white boots, respectively, while Aboah teamed her pink and tan gown with a pair of nude pumps and Hadid paired an ethereal halter-neck gown with black heels.