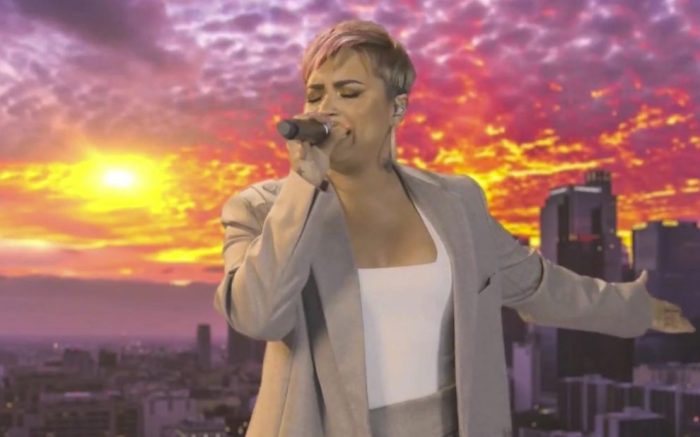 For the special occasion, Lovato wore a gray power suit, which included an oversized blazer and high waisted trousers. Underneath the two piece, Lovato opted for a fitted white top.

Suits have been projected to be big for this year with brands like Giorgio Armani, Max Mara, Tom Ford and more showing different takes on the professional silhouette on the spring 2021 runways. Additionally, gray is a must-have color, according to Pantone. In December, the color authority, revealed the colors of 2021 to be Ultimate Gray and Illuminating. The hues are meant to represent “a marriage of color conveying a message of strength and hopefulness that is both enduring and uplifting.”

As for footwear, Lovato sported a pair of cream-colored heels, giving the ensemble a soft and regal touch. The singer then elevated the look with her vibrant pink hair and chunky hoop earrings.

Biden and Harris’ inauguration made history today for a myriad of reasons. Biden is the oldest person ever sworn in as president while Harris is the first-ever female vice president of the United States. The daughter of Jamaican and Indian immigrants, she is also the first Black person and first person of South Asian descent to serve in the second-highest office. She joins President Joe Biden in leading a country left on the edge of its seat following the second impeachment of current President Donald Trump by the House of Representatives last week.