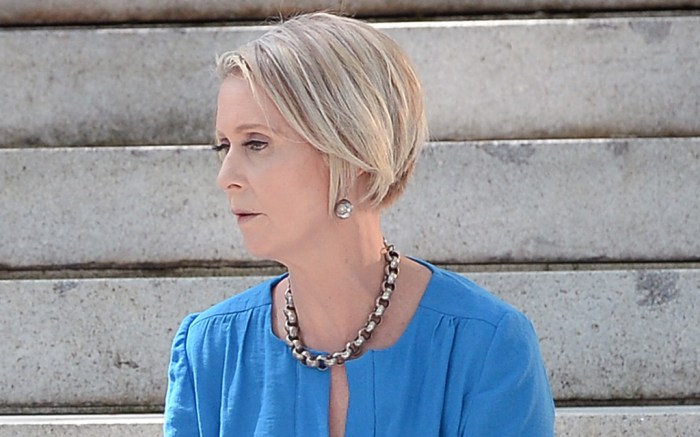 While filming for HBO Max’s “Sex and the City” reboot in New York City, Nixon wore a lightweight blue blouse with a square neckline. The top was tucked into a flowing skirt, featuring a geometric paneled print in various shades of light and dark blue. Nixon accessorized with a brown leather backpack and coordinating woven tote bag, which featured matching brown leather handles. Her look was completed with silver jewelry, including various rings, a chunky necklace and drop earrings with iridescent beads in their centers.

When it came to shoes, the “Ratched” actress slipped on a pair of light blue ballet flats by Jessica Simpson. The nearly sold-out Mandalaye pair featured an embossed texture and squared toes, as well as darker blue elastic straps that crossed around her ankles. When paired with her look, the wallet-friendly flats created a monochrome effect with their numerous shades of blue. As a flat shoe with sturdy ankle support, they were also a practical choice when walking around set. Nixon’s flats that range from $23-$68 on Amazon.com.

Monochrome dressing is one of the season’s greatest styling hacks. The technique involves mixing various pieces in the same color or print to create an effortless and streamlined look. It’s clear the styling hack will be a part of “And Just Like That…,” though it remains to be seen if other characters will make use of it. In the real world, stars like Jennifer Lopez, Rita Ora and Lizzo have all made use of it, proving its status as a go-to move for celebrities.

As Miranda Hobbes, Nixon has worn a range of looks for “And Just Like That…” that are signatures of the character’s eclectic style. While filming, she’s been seen in flowing dresses and lightweight tops from labels like L’Agence, Altuzarra, and Dries Van Noten, often featuring prints like plaids and colorful stripes. Shoe-wise, Miranda sticks to versatile tonal styles like Gianvito Rossi platform sandals, Manolo Blahnik pumps, and Maje Paris wedges.

When it comes to footwear, Nixon’s style is often versatile and chic. The actress favors pointed and open-toed pumps in single-tone colors or neutral hues for the red carpet, typically from labels like Sarah Flint, Oscar de la Renta, and Saint Laurent. When off-duty, she can be seen in platform wedges and flats from affordable brands like Jessica Simpson.

Click through the gallery for more of the best shoe styles from “Sex and the City.”