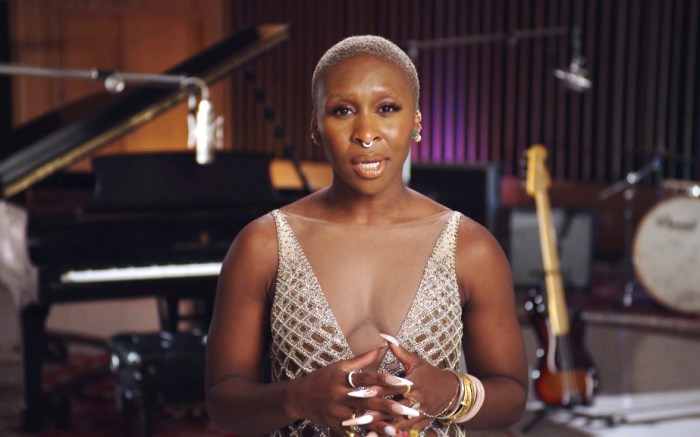 For the 2021 NAACP Image Awards on Saturday, Erivo showcased a dreamy look, wearing a sparkly netted dress from Lanvin.

The whimsical look featured a jewel embellished top with sheer detailing. The dress was completed with a ruffled salmon pink skirt that billowed out around her. As for footwear, Erivo — who was styled by Jason Bolden — wore classic white pumps. The shoes featured a pointed toe and appeared to sit atop a stiletto heel.

Erivo accessorized with several gold bracelets, rings and dangling earrings. The star actress shared an Instagram video of her look, which shows her twirling in the dainty dress.

Erivo’s netted moment comes after she wowed in a Vera Wang look at the Critics’ Choice Awards earlier this month. The stunning custom dress featured a sheer, lace-adorned overlay that cascaded down past her feet. Underneath, was a sleek black flowing skirt. The gown gave off a slight gothic effect and was complete with a cinched waist.

For the show, which kicked off award season, Erivo followed the neon trend, sporting a highlighter green umbrella dress — a look straight off the Paris runway from Valentino Haute Couture. The frock featured a mesh, wetsuit-like construction with thick vertical lines cascading down the center and sides. Erivo teamed the dress with beige leather gloves and bold earrings by Wempe.