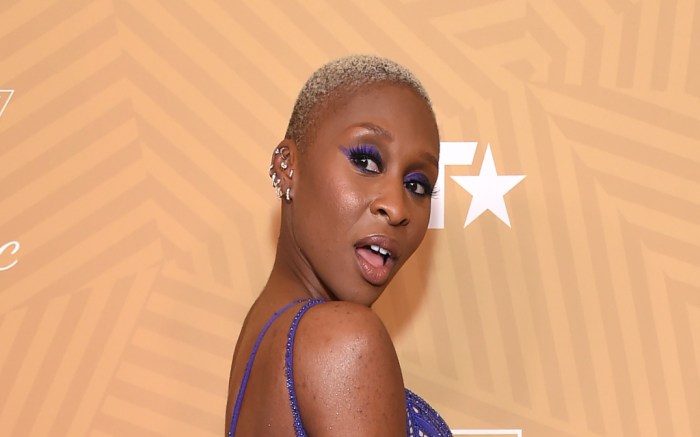 On Sunday, Erivo’s stylist Jason Bolden took to Instagram, sharing a video of the actress in a whimsical custom gown from Vera Wang. The stunning dress featured a sheer, lace-adorned overlay that cascaded down past her feet. Underneath, was a sleek black flowing skirt. The gown gave off a slight gothic effect and was complete with a cinched waist.

For the show, which kicked off award season, Erivo followed the neon trend, sporting a highlighter green umbrella dress — a look straight off the Paris runway from Valentino Haute Couture. The frock featured a mesh, wetsuit-like construction with thick vertical lines cascading down the center and sides. Erivo teamed the dress with beige leather gloves and bold earrings by Wempe.

The Critics’ Choice Awards are currently airing live at 7 p.m. ET on the CW. The show can also be streamed live on Hulu, fuboTV and Sling TV. Taye Diggs is hosting this year’s ceremony, making it his third time in a row. The actor will be emceeing live from the stage of Barker Hangar in Santa Monica. Aside from fashion, the night will certainly be a big one for Netflix. The streaming platform is up for 72 nominations. Included in the nominations are Amanda Seyfried, who is up for Best Supporting Actress for “Mank” and Zendaya, who is also up for Best Actress for her role in “Malcolm & Marie.”

Click through the gallery to see more moments from the Critics’ Choice Awards 2021.