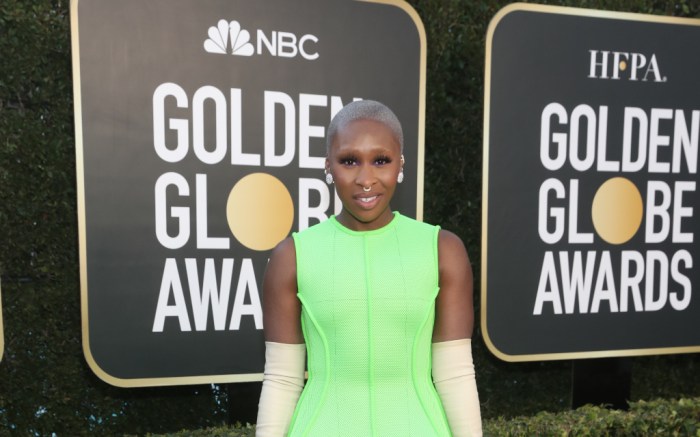 Cynthia Erivo looked like a futuristic ballerina at the 2021 Golden Globe Awards on Sunday.

For the ceremony, Erivo, who was styled by Jason Bolden, followed the neon trend, sporting a highlighter green umbrella dress — a look straight off the Paris runway from Valentino Haute Couture. The frock featured a mesh, wetsuit-like construction with thick vertical lines cascading down the center and sides. Erivo teamed the dress with beige leather gloves and bold earrings by Wempe.

Of heels, Bolden shared during E!’s pre-show broadcast, “The shoes are like skyscrapers! The color and the shape [of the dress] is so bold and… add some much-needed fantasy.”

For this year’s ceremony, Erivo will be presenting along with other A-listers, including Awkwafina, Angela Bassett, Kevin Bacon, Kyra Sedgwick and more.

The Golden Globes are airing live on NBC. Tina Fey is hosting from The Rainbow Room in New York City while Amy Poehler is co-hosting from the Beverly Hilton in Los Angeles.

Click through the gallery to see more looks from the 2021 Golden Globe Awards.