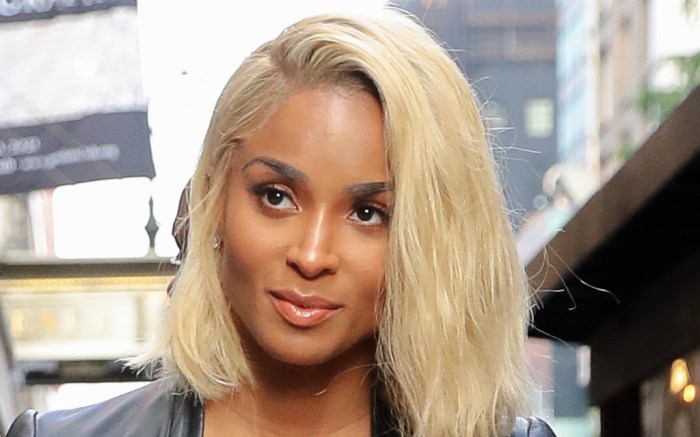 Ciara has made Venice her personal runway on her anniversary trip with husband Russell Wilson this week. Her latest outfit put a bold spin on the corset trend—from some of the first designers who made it famous.

The “Level Up” singer wore a red midi dress by Dolce & Gabbana during her vacation in the City of Water, which she shared on Instagram. The dress featured a sheer ruched red skirt and cold-shoulder sleeves. Most notable were the piece’s side and front lacing, as well as its’ bustier silhouette—which added a romantic flair to the piece. A black version of Ciara’s dress retails for $3,495 on Farfetch.com.

On the footwear front, the “1, 2 Step” musician slipped on a pair of black suede sandals. The pair featured a slim ankle and toe strap, with heels that appeared to be at least 4 inches tall. Minimalist sandals are a favorite of Ciara’s, who often wears bold outfits with versatile pairs by brands like Giuseppe Zanotti, Femme, and DSquared2. A similar style by Stuart Weitzman retails for $398 on Zappos.com.

Ciara’s outfit was a sleek take on the corsetry trend sweeping the fashion industry right now. Her dress was a clever nod to Dolce & Gabbana’s legacy, as the duo’s label was one of the first to popularize the style in the ’90s alongside designers like Vivienne Westwood, Thierry Mugler, and Jean Paul Gaultier. In recent years, the traditional corset and bustier silhouettes have returned to fashion, with vintage pieces from labels like Westwood becoming must-have items. However, a range of other brands like Alaïa, Rosie Assoulin, LaQuan Smith, and Dion Lee have released their own unique takes on the Victorian style, which adds an air of vintage romanticism to any ensemble.

When it comes to fashion, Ciara always goes for bold looks. The singer frequently can be seen in gowns, dresses, and bodysuits featuring bright prints, sleek textures, and bold colors by labels like Tom Ford, Alexandre Vauthier, Dundas, David Koma, and more. Her shoe wardrobe incorporates daring styles with tall heels and strappy silhouettes from top labels like Zanotti, Femme, and Stuart Weitzman. She’s also known to favor tall boots by Prada and Lesilla, and can often can be seen in Converse sneakers while off-duty.

Step into a pair of sleek black sandals, inspired by Ciara.

Click through the gallery to see Ciara’s bold style transformation over the years.