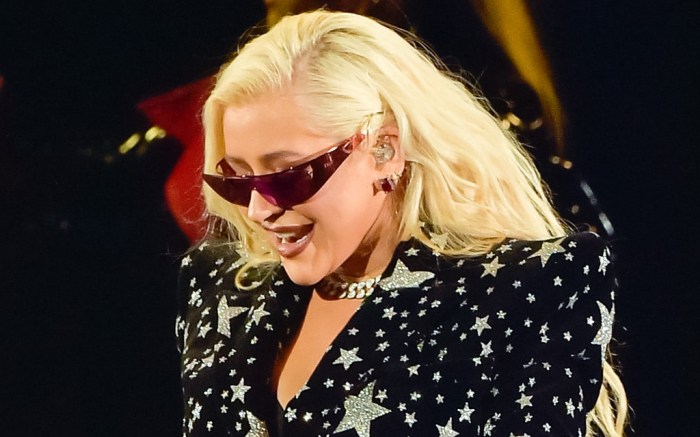 While performing onstage, the “Burlesque” actress wore a strong-shouldered blazer. The black jacket featured a velvet texture, as well as exaggerated padded shoulders. Its’ greatest statement came from an allover print of sparkly silver stars. Aguilera added to her look’s rockstar glamour by pairing the statement piece with black leather gloves, as well as angular dark red sunglasses and stud earrings.

When it came to shoes, the former “The Voice” judge wore a pair of sleek black boots. The edgy style featured thigh-high leather uppers, as well as pointed toes with short platform soles. Aguilera’s boots also included thick heels that totaled at least 3 inches in height. The star’s footwear added to her outfit’s edgy nature, giving it added sleekness during her set.

Boots like Aguilera’s are a regular seasonal trend, thanks to their full coverage and versatility. Leather and suede boots with supportive, thick heels and pointed toes in neutral hues are especially frequent, regularly appearing in stores and the streets in the fall and winter months. Aside from the “Lady Marmalade” singer, Rosie Huntington-Whiteley, Chiara Ferragni and Emily Ratajkowski have also worn pairs by Zara, Proenza Schouler and Fendi in recent weeks.

On the footwear front, the “Genie in a Bottle” singer is no stranger to an elevated look. Aguilera favors boots, sandals and pumps with sky-high heels by Gianvito Rossi, Amina Muaddi and Balenciaga for events. She also has a penchant for taking her outfits above and beyond the expected, often wearing thigh-high boots, strappy sandals, and chunky sneakers by Yeezy, Nike, and Gina Shoes when off-duty. Aguilera notably has a collection of Christian Louboutin pumps in her boudoir-themed shoe closet as well, serving as a muse to the Italian designer.

Click through the gallery for even more of Christina Aguilera’s best and boldest looks over the years.