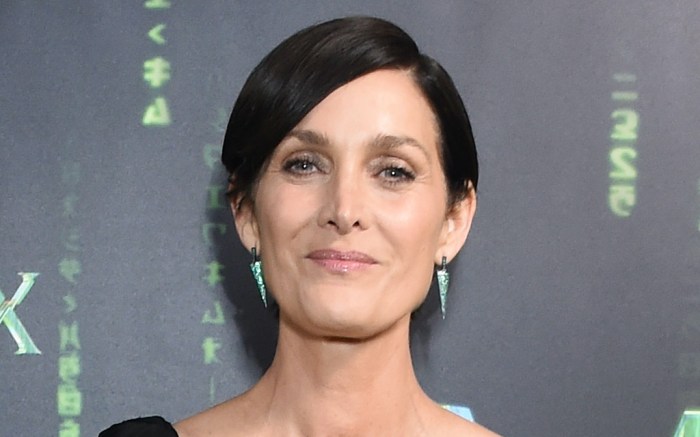 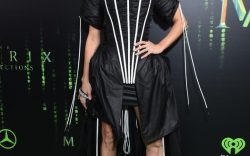 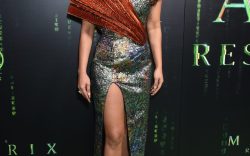 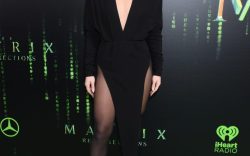 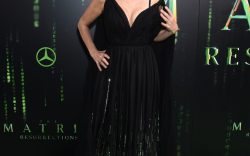 Carrie-Anne Moss brought futuristic glamour to the premiere of “The Matrix Resurrections” in San Francisco.

Returning to her starring role as Trinity in the sci-fi franchise, Moss hit the red carpet in a black gown by Oscar de la Renta. The “Snow Cake” actress’ custom sleeveless dress featured a flowing cape and long train, as well as a plunging neckline for added drama. Mimicking the franchises’ signature lines of code, Moss’ dress also featured glittering lines of green and silver sequins at its’ hem in a clever and glamorous self-reference. The actress’ look was complete with sparkling drop earrings and a large silver ring.

For footwear, Moss appeared to be wearing black square-toed pumps—though her style wasn’t fully visible beneath her gowns’ long skirt. Based on their subtle sheen, its likely the pair was crafted from satin or another smooth texture. With their dark neutral hue, the shoes allowed Moss’ dress to make the boldest statement for the return of the ’90s franchise.

Moss often opts for versatile black heels on the red carpet. The “Disturbia” actress can regularly be seen in pointed-toe pumps and platform sandals, often featuring leather uppers with block or stiletto heels. However, she’s also been spotted in jewel-toned suede pumps on occasion, as well as metallic ankle-strap sandals in pale gold hues.

Click through the gallery to see more celebrity arrivals from the “Matrix Resurrections” premiere.