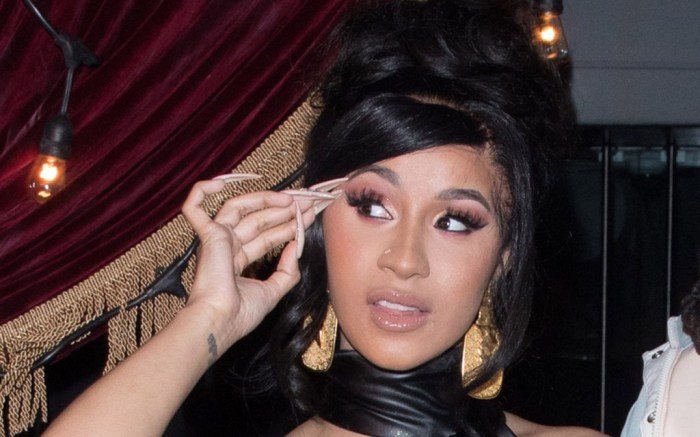 Cardi B may have just worn her wildest shoes to date.

The “WAP” rapper took to Instagram last night to show off her unbelievable metallic boots courtesy of Balenciaga. The unique gold shoes feature an armor-inspired design, coating a thigh-high silhouette in a hardened yet sleek shell that resembles the gear of knights from centuries ago.

Set atop a lifted heel, the boots also included added studs, buckles, and ridged detailing across the uppers with an elongated pointed-toe front to finish. The shoes draw similarities to pieces from the French fashion house’s spring ’07 runway show; the retro collection included a pant version of the rapper’s standout legwear.

And if her shoes weren’t wild enough Cardi B also modeled claw-like gold nail tips to match her footwear of choice.

Though you could only see her white robe in her first post, a second video revealed that the “I Like It” musician was wearing just a soft-knit bralette and black briefs to match the boots — which were then strewn across the couch in her dressing room.

Deemed the Style Influencer of the Year for the recent 2020 FN Achievement Awards, Cardi B herself is a master of both luxurious apparel and athleisure fashion. She joined Balenciaga as the face of its fall ’20 campaign in September, with ads displayed across the Louvre in Paris.

The “Bodak Yellow” rapper also continues to hold the ultimate hook-up for sportswear since partnering with Reebok in November 2018; together, Cardi B has helped the brand released a series of collections as she starred in a variety of campaigns and videos featuring embellished sneakers and vintage-inspired pieces before creating her own collection of footwear and apparel.

As if her efforts weren’t already enough, she additionally partnered with Fashion Nova to donate $1,000 every hour for a month as part of the “Fashion Nova Cares” initiative. The Grammy Award-winning artist also recently filed paperwork with the United States Patent and Trademark Office in September in an attempt to trademark the term “WAP” for a variety of items from footwear to apparel to even alcoholic and non-alcoholic beverages.

While Cardi B’s insane boots are not for sale, you can still style your looks like the rapper in these chic gold pairs.

Click through the gallery to find more of Cardi B’s wild footwear looks over the years.