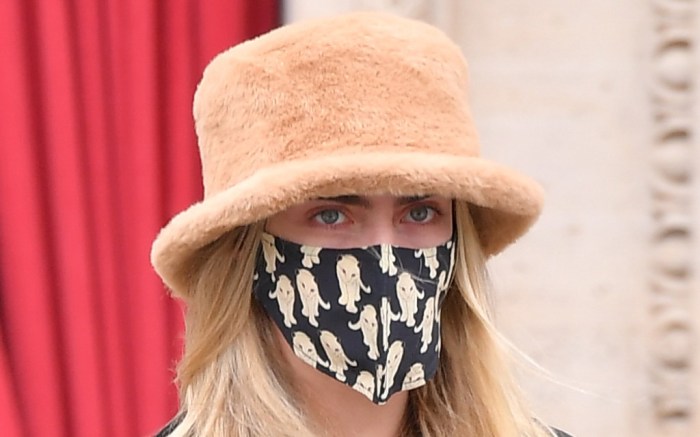 The supermodel was spotted heading out from her hotel this morning, sporting a mix of this season’s biggest trends as she hit the city of light in style. The British native continued her signature edgy style in a classic white tee layered under an oversize leather jacket with black skinny jeans to match.

Delevingne then reached for a new celebrity-beloved accessory to keep warm: a fuzzy bucket hat. The standout piece taps into retro trends from the 1990s — a common theme for celebrity style this year — with its furry uppers and wide-brim finish. Rihanna and Gigi Hadid are just two of the many stars who have been spotted in the trend thus far this season.

Highlighting another major trend for 2021, Delevingne decided on a moto-chic set of combat boots to round out her ensemble. The lugged pair highlighted sleek leather uppers with a classic lace-up silhouette and treaded outsole. Coming from RtA, the boot’s unique touch came with the extended shaft design, a sock-style fitted layer for the ultimate grungy appeal. You can shop the model’s choice of footwear for $895 at Farfetch.com.

Combat boots and hiking-inspired styles are the new norm amongst celebrity style trends, experiencing a revitalization along with a dew other silhouettes from the 1990s. From brands like Prada along with Bottega Veneta and Dr. Martens, these lug-sole boots offer ease of wear with an edgy-chic appeal. This season, you’ll spot utilitarian boots on the likes of Kylie Jenner, J-Lo, Gwen Stefani and more major stars.

In the fashion world, Delevingne has held a myriad of roles. She signed on as an ambassador for Puma in 2016 and has since designed a slew of apparel and footwear for the brand. Together, they also partnered with Balmain for a high fashion meets athleisure collection in 2019 and she also helped introduce their Pride collection for 2020.

As a model-turned-actress, you can find the 28-year-old on everything from red carpets to couture runways, previously appearing in shows for major brands like Burberry, Saint Laurent, Givenchy, Fendi and, of course, Chanel. Though her modeling days are mostly in the past, the “Carnival Row” star was once a muse for the late great Chanel creative director Karl Lagerfeld and appeared in many of his shows for the French fashion house.

Click through the gallery to check out more stars leaning into the major combat boot trend for 2021.