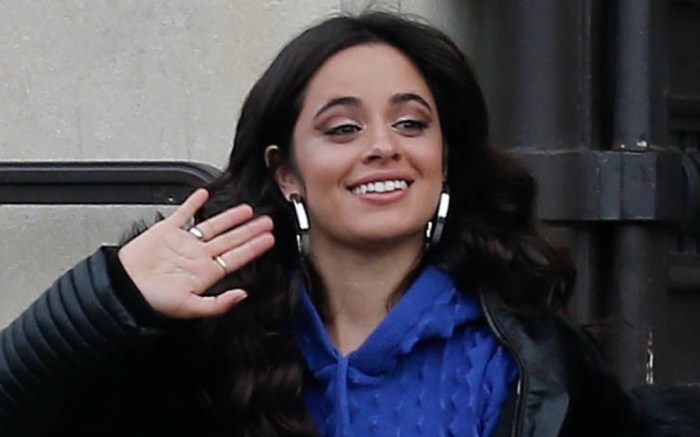 The “Don’t Go Yet” singer was spotted leaving L’Oreal’s runway show this morning, wearing a blue textured hoodie dress. The cobalt blue set featured an all-over pointed texture, as well as a midi-length skirt and hooded top. To beat the chill of the French fall season, Cabello layered the cozy garment with a padded black jacket with a fur-lined hood. The singer’s look was complete with shiny silver hoop earrings, as well as several silver rings.

Though Cabello’s outfit was already an edgier style than we’ve seen her previously wear, her footwear continued the revamped look. The “Cinderella” star’s shoes of choice were platform combat boots, which elevated her outfit with a punk rock twist. Her boots included lace-up black leather uppers and ridged soles, similar to combat boots. However, the style’s thicker platforms and block heels, which appeared to total at least 3 inches in height, gave a sleek spin to the utilitarian shoe.


Platform boots have been on the rise this season, due to their thickness’ ability to bring outfits support and style. Black styles like Cabello’s are an easy solution for fall footwear that can brave cold temperatures, while still being a versatile shoe that smoothly pairs with any look. In recent weeks, stars like Rita Ora, Cardi B and Vanessa Hudgens have also worn platform boots from top brands like Vera Wang, Rick Owens and more.

For footwear, the “Havana” singer regularly wears sneakers by Nike and Adidas, in addition to slides and sandals by Franco Sarto, Birkenstock and Steve Madden. However, her wallet-friendly shoe style often incorporates brands like Topshop, Candie’s and UrbanOG as well. The singer often pairs these with dresses, tops and bottoms by affordable brands like H&M, Forever 21 and Zara, in addition to high-end labels like Dolce & Gabbana, Isabel Marant and Versace.

Click through the gallery to see Cabello’s affordable shoe style over the years.