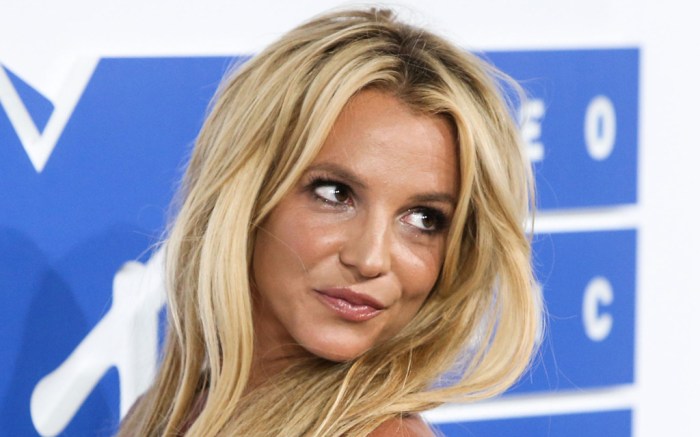 Britney Spears began her 40th birthday on a high note, thanks to statement boots and a romantic getaway.

The Grammy Award-winning singer snapped photos on a private plane with fiancée Sam Asghari. Spears dressed casually and comfortably for the occasion, pairing a white long-sleeved T-shirt with cutoff denim shorts. The bleached blue pair featured an acid-washed texture, as well as lightly distressed hems. Her ensemble was complete with black aviator sunglasses, ideal for travel. The musician also shared a sweet video of her posing with Asghari, prior to lift off.

When it came to shoes, Spears chose a pair of bright red IMPO boots. The Obia style included a knee-high silhouette with stretchy uppers, rounded toes and platform soles. Her footwear also came with 4-inch block heels, as well as swirling silver buckle details. The style literally elevated Spears, while adding a burst of color to her classic casual ensemble. Her boots retail for $60—on sale from $102—on NordstromRack.com.

Statement boots have re-emerged as temperatures drop, cementing their status as a go-to style this winter. Platform and pointed-toe pairs with bold colors, textures and embellishments are particularly popular, due to their streamlined silhouette and  bold appearance. Stars like Emily Ratajkowski, Jordan Alexander and Erika Jayne have also worn styled by Jimmy Choo, Fendi and Christian Louboutin in recent weeks, in addition to Spears.

For footwear, The “Lucky” singer’s go-to shoes have become Birkenstock’s Arizona sandals, which she owns in at least five colors. Aside from the comfy style, Spears also wears Hoka One One and Asics sneakers when off-duty. On the red carpet, her looks often include embellished sandals and pointed-toe pumps by Louboutin, Stuart Weitzman and Rene Caovilla, among other top brands. However, Spears also wears wallet-friendly sandals and boots from brands like Steve Madden, Schutz and her own 2009 Candies collection.

Elevate your winter looks with bright boots, like Britney Spears.

Click through the gallery to see Spears’ boldest red carpet looks over the years.