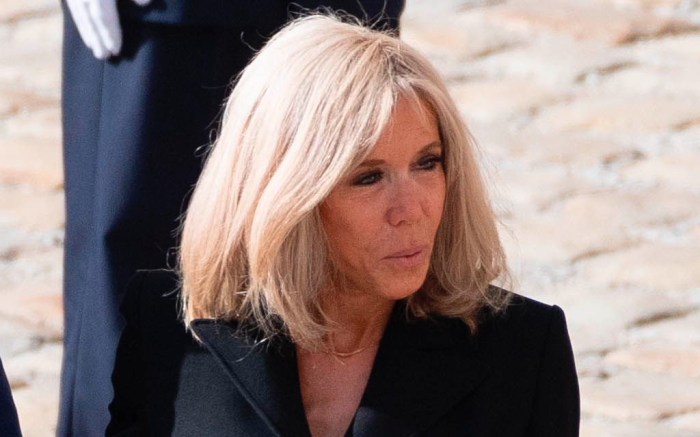 For the occasion, Macron wore a black suit with a double-breasted blazer. She paired it with thin sunglasses and a black leather clutch. The first lady of France’s ensemble was complete with Louis Vuitton ankle boots.

During their appearance at the ceremony, President Macron gave an emotional eulogy recounting Belmondo’s relatability and long-spanning career, where he deemed the actor as a “national treasure.” His wife looked on from the courtyard, where roughly 1,000 people were in attendance. The occasion marked the first tribute ceremony to take place at the Invalides monument. There will be a private funeral for Belmondo taking place on Friday, Sept. 10.

Macron’s daily style is famously minimalist, containing tones of black, gray, navy and white. Pops of tonal colors like pale yellow, coral and red are occasionally part of her wardrobe, often by French labels like Alaïa, Alexandre Vauthier and Dior. Most of Macron’s shoes are from Louis Vuitton, which is a favorite brand of the French first lady; she also counts designer Nicolas Ghesquière as a close friend. Aside from boots, she can also be seen in pointed-toe pumps and the occasional pair of sporty sneakers.