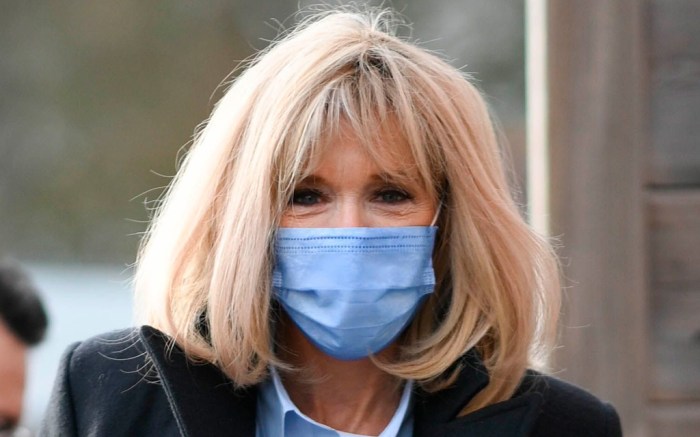 French first lady Brigitte Macron joined a selection of French officials and members of the fashion industry today as they honored the late Pierre Cardin with a memorial service in Paris. Cardin, a beloved designer and Space Age innovator, passed on Dec. 29, 2020; he was 98.

For this morning’s funeral mass service, the French first lady kept with somber traditions in an all-black look that teamed a Louis Vuitton cape coat with a matching scarf and skinny-fit trousers.

She then represented her nation in a pair of boots from French fashion house Louis Vuitton. The pair features a smooth sock-style upper with a 3.7-inch block heel covered in the brand’s logo on a brown leather panel. The Matchmake ankle boot retails for $1,240 on the brand’s website.

Known for his avant-garde, geometric designs, Pierre Cardin rose to fame in the 1950s and 1960s for his “Space Age” collection and iconic Bubble Dress. He also became a master in licensing, not only for his clothing and cosmetics but later for products ranging from mattresses to cigarettes. Cardin reportedly had 800 licenses in 140 countries, including men’s shoes in the ’70s and ’80s from Smerling Imports.

When it comes to her own everyday style, Brigitte Macron oftentimes favors Louis Vuitton once more when it comes to clothing in addition to shoes and accessories. With footwear, specifically, the former educator leans toward pointed-toe pumps with a stiletto or block heel usually around 4 inches high. The Eyeline silhouette from the French fashion powerhouse remains one of her favorites, of course, but she also frequents the graphic-print Matchmake pump and booties. The French first lady lives up to the style motifs of her native France, opting for layered looks and perfectly tailored pieces that keep up with the nation’s style aesthetic: chic, clean and understated.

Click through the gallery to discover more of Brigitte Macron’s top footwear looks over the years.