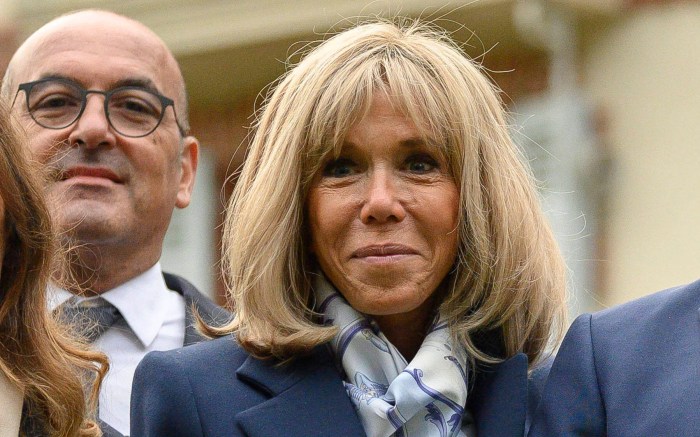 For the occasion, Macron dressed in chic style in a dark blue suit. Her outfit featured a blazer with wide pointed lapels, as well as coordinating trousers. The French First Lady layered the set over a white blouse, and warded off the autumn chill with a pale blue striped scarf. Her look was complete with a chunky gold ring.

Macron paired her suit with a sharp pair of Louis Vuitton ankle boots. The Matchmake style featured black leather uppers with buckled ankle straps in a pointed-toe silhouette. They also featured a pop of prints from brown canvas in the brand’s signature monogram, atop the boots’ heel counters and 3.9-inch block heels. Macron’s boots retail for $1,770 on LouisVuitton.com.

Ankle boots are trending again, now that fall has begun and temperatures have dropped. Styles like Macron’s have grown popular from their support via thick heels and full foot coverage, as well as sharp finishes from elements like neutral tones and pointed toes. In addition to the French first lady, Kendall Jenner, Taylor Swift and Nicole Richie have also worn pairs from brands including Stella McCartney and Christy Dawn in recent weeks.