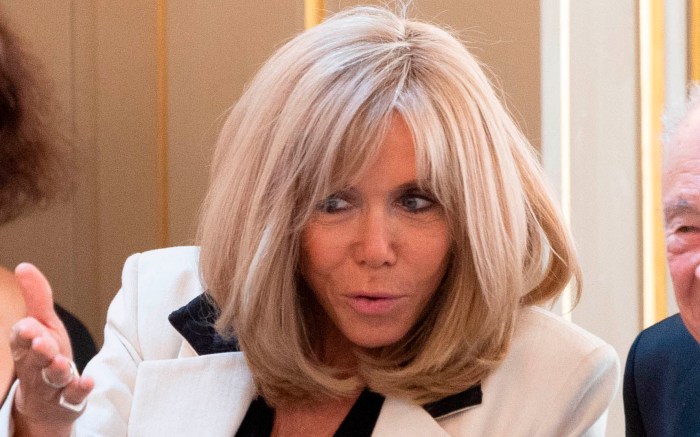 For the occasion, Macron outfitted herself in an utterly chic ensemble. The French first lady donned a crisp white blazer, which featured black and white lapels and whimsical matching bow embellishments on the sides. A draped black top and sleek black trousers completed the ensemble. She accessorized with several rings and a silver and gold watch, pieces that were minimalist but accented her outfit’s classic look.


The outfit perfectly complemented Macron’s minimalist wardrobe, which is regarded as a standard for the French-chic aesthetic. Macron regularly wears sharp black, gray, navy and white blazers, often paired with skinny jeans and trousers in dark blue or black washes. On dressier occasions, she dons similarly colored pantsuits, as well. For formal outings, she regularly sports elegant dresses and gowns in neutral tones with minimal embellishments. Pops of chic colors like pale yellow, coral and red are occasionally incorporated into her wardrobe as well — and most pieces are by French labels like Alaia, Alexandre Vauthier, Christian Dior and Louis Vuitton.

Though photographers didn’t capture Macron’s footwear, we can imagine that the outfit featured some of her signature shoe styles. The former schoolteacher is often spotted in pointed-toe stiletto pumps in similar colors as her wardrobe — though a tan, brown, or olive green pair are occasionally mixed in as well.

Most of Macron’s shoes are usually by Vuitton — a favorite brand of the French first lady, who counts designer Nicolas Ghesquière as a close friend. Aside from heels, she can also be seen in block-heeled ankle boots and the occasional pair of sporty sneakers in similarly chic colors as her wardrobe.

Add a dose of French chic to your wardrobe with a sharp white blazer, inspired by Brigitte Macron.