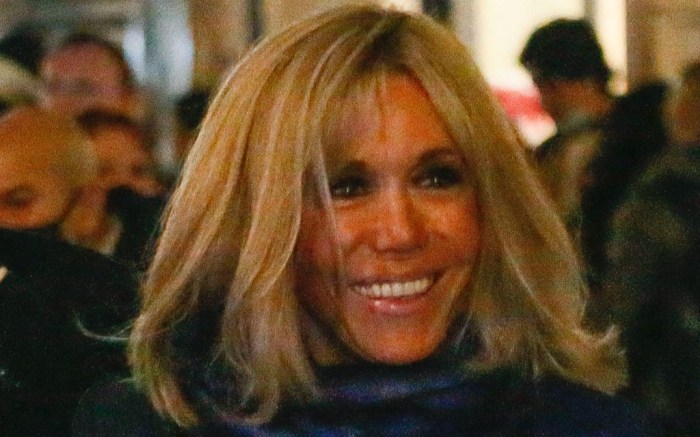 For the occasion, Macron wore a timelessly sharp ensemble. The French first lady donned a long-sleeved black minidress, with a sharp skirt that hit just above the knee. Keeping her accents minimal, Macron layered the piece with a black leather belt and sheer black tights, accessorizing with a quilted black leather Chanel clutch.

Macron created a monochrome moment with her footwear, a pair of pointed-toe pumps. The shoes included black uppers with triangular toes, as well as heels that appeared to total at least 3 inches in height. Macron’s footwear of choice created an ensemble that was streamlined and sharp—as well as extremely versatile.

The French first lady’s outfit was also classic when she left the ceremony. Walking outside with Joachim Sauer after Merkel’s ceremony, Macron layered her chic outfit with a versatile tan coat, black leather gloves and scarf. All three pieces, like her outfit, were utterly timeless.

Pointed-toe pumps have emerged as a top shoe trend this year, especially as live events have returned and more people are dressing up. The style often streamlines any ensemble from its sleek silhouettes and daring heels. Macron isn’t the only star to wear a pair this season; in recent weeks, Zendaya, Paris Hilton and Sarah Jessica Parker have also worn pairs from Christian Louboutin, Aquazzura and Manolo Blahnik.

Elevate your fall looks like Macron in sharp black pumps.