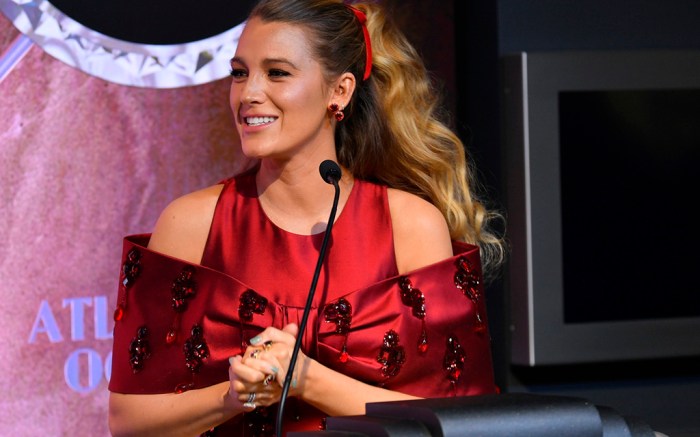 Blake Lively looked like a present in New York on Monday night. The actress was on hand for Empire State Building’s special lighting ceremony, wearing a holiday-ready, red minidress, which was made complete with the a big red bow.

For her look, Lively chose the satin taffeta ensemble by Georges Chakra from the fall ’21 couture collection, featuring  ruby chandelier embellishments. For her shoes, she wore a pair of Manolo Blahnik’s iconic Hangisi pumps in red, complete with the jeweled buckle adornment. Although, Lively made some adjustments to the shoes, which originally had white crystal embellishments by painting them red for a full monochromatic moment.

“Sorry to Manolo Blahnik for painting the white jewels on my shoes with red nail polish as I was walking out the door,” she wrote on Instagram Stories on Tuesday. “Worth it tho?”

Blahnik is currently celebrating his 50th-year anniversary in business where he recently took FN through never-before-told stories and anecdotes in our latest cover story, which included his inspiration behind the famous Hangisi style.

According to the designer, when the now legendary Hangisi pump with a crystal buckle launched for spring ’08, it became the shoe of the year, even before Mr. Big proposed to Carrie Bradshaw with the shoe in the “Sex and the City” film. Blahnik said he dreamed up the style after a trip to Palermo, Italy to see an exhibition by the Italian portraitist Giovanni Boldini. “He painted European society ladies in the late 19th and early 20th centuries, and I noticed some of them had buckles on their shoes,” Blahnik said. There are also echoes of the traditional North African baboosh slippers, immortalized by the French artist Eugène Delacroix in “Women of Algiers,” the designer recalled, noting that they were “in a state of ecstasy in a harem.”

Since its grand debut, the Hangisi has been produced in over 100 materials and colorways, and evolved into boots, mules, d’Orsays and flats.

In New York on Thursday, Lively joined the festivities at the Empire State Building as the city celebrated the monumental return of international flights to the U.S. on Nov. 8. The British Consulate General of New York, chairman and CEO of British Airways, and CEO of NYC & Company came together to light the building’s iconic tower blue, white and red to mark the occasion, with British passengers from the first Transatlantic flight (special flight number BA001) in attendance.