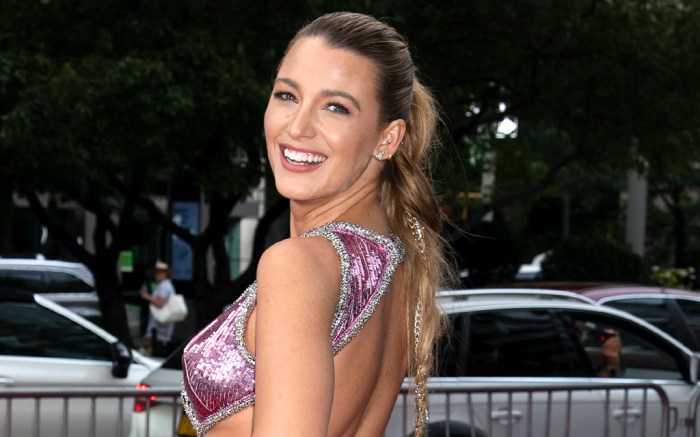 The “Gossip Girl” actress stunned with husband Ryan Reynolds at the premiere of his newest film, “Free Guy.” For the occasion, Lively wore a sparkling dress from Prabal Gurung’s resort 2022 collection. The piece was covered in sleek pink sequins with silver sequin lining — which crossed at its front to create a geometric cutout and backless silhouette. Lively further accentuated her ensemble’s glamour with a braid entwined with various diamond and silver necklaces by Lorraine Schwartz. The glitzy ensemble was complete with Schwartz’s diamond stud earrings and rings, as well as a star-shaped Judith Lieber clutch covered in crystals.


When it came to shoes, Lively tapped her go-to designer, Christian Louboutin, for a pair to wear to the premiere. Though her footwear wasn’t visible beneath the shimmering skirt, the “Savages” star likely donned the Parisian designer’s signature pointed-toe or peep-toe pumps in a coordinating color, crystals, or sequins, as she’s previously done at past events. Lively has been a Louboutin muse since starring in the original “Gossip Girl” series in the mid-2000’s, even accompanying him to the 2018 Met Gala. She also memorably wore five pairs of his high-end heels in a single day while promoting “A Simple Favor” in 2017.

However, Louboutin’s weren’t the only shoes Lively wore last night. The actress posted a humorous shot on Instagram Stories shortly before hitting the red carpet, lifting up her dress to reveal a casual pair of white platform Converse sneakers. The Chuck Taylor style’s casual nature contrasted her Gurung dress with its casual and comfy nature — though we’d say it made an equally stylish statement.


Lively’s Gurung dress is the most glamorous iteration we’ve seen of the cutout dress trend so far. This summer, the style has taken off due to its’ ability to beat the summer heat without showing too much skin. Lively’s dress featured similar angular cutouts as numbers by Cult Gaia, Patbo, and Azzi & Osta, previously spotted on stars like Jennifer Lopez, Rita Ora, and Vanessa Hudgens this season.

When it comes to fashion, Lively has a penchant for glamour. The actress is known for wearing detailed ensembles with intricate sequins, embroidery, and embellishments from high-end brands like Ralph Lauren, Versace, and Brandon Maxwell, among numerous others. On the shoe front, these are often accompanied by pointed-toe pumps, sleek boots, and strappy sandals; aside from Louboutin, Lively has also been spotted in styles by Alaïa, Tory Burch, and Valentino. When off-duty, she prefers sneakers by Nike, Allbirds, and Vans.

The actress has been a longtime fixture on the fashion scene, stemming from her glamorous style and close friendships with designers like Louboutin and the late Karl Lagerfeld. Lively previously served as the face of L’Oreal and Gucci’s Gucci Premiere perfume, as well as Chanel’s Mademoiselle handbag line, in the early 2010’s. She’s also a front row regular at Fashion Month, appearing at shows for brands like Michael Kors, Gucci, and Dior, among others.

Click through the gallery for more of Blake Lively’s hottest shoe moments over the years.