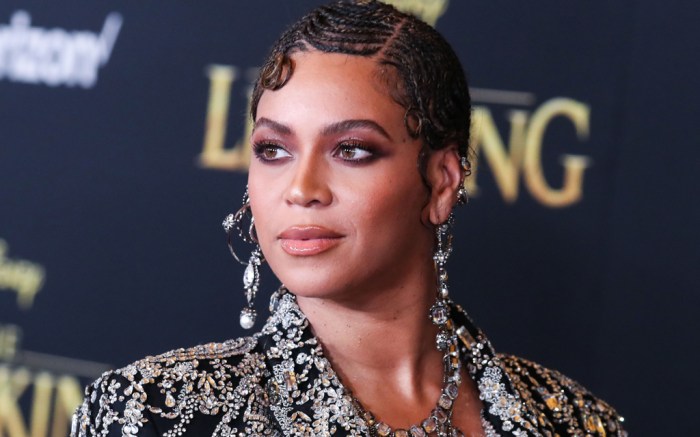 Beyoncé took the neon route for her latest date night look on a yacht with Jay-Z.

Her look was complete with a rectangular metallic gold clutch, sparkling drop earrings and cat-eye sunglasses, as well as the ultimate accessory: a glass of pink champagne. Jay-Z himself went for a more casual look, donning a white nylon windbreaker with black trousers.

For footwear, the “Black Is King” musician stepped out in one of her go-to designers: Christian Louboutin. The star picked a pair of the French designer’s Loubigirl sandals, which featured thin ankle, toe and slingback straps in a matching green patent leather. The bold shoes also included 3.93-inch stiletto heels. Beyoncé’s Louboutins retail for $795 on ChristianLouboutin.com.

Strappy sandals have made their official return to street style and the runways, thanks to a resurgence in live events. Beyoncé has a penchant for pairing the style with monochrome or coordinating outfits. However, she isn’t the only celebrity who’s worn sleek sandals in recent weeks. Stars like Hailey Bieber, Rosie Huntington-Whiteley and Jennifer Lopez have also been seen in pairs by Bottega Veneta, Femme LA and more top brands.

When it comes to footwear, Beyoncé never shies away from making a statement. The Grammy-winning star has worn Louboutin pumps and sandals in a variety of colors, textures and heel heights throughout her career, often coordinated with her outfits. However, she’s also known for wearing sandals and mules by Gianvito Rossi, Aquazzura, The Attico and numerous luxury brands.

When off-duty, the star can be seen in sneakers by Ivy Park x Adidas — though she often dresses up in heels from labels like Alessandra Rich, Jacquemus and Francesco Russo. Beyoncé most recently launched her fourth Adidas x Ivy Park collection this year, and began a new ambassadorship with Jay-Z for Tiffany & Co. with a viral ad campaign.

Get your glow on with bright green sandals, inspired by Beyoncé.

Click through the gallery to see more of Beyoncé’s best red carpet looks over the years.