From Kamala Harris to Amanda Gorman, the Best Monochrome Outfits From the 2021 Inauguration 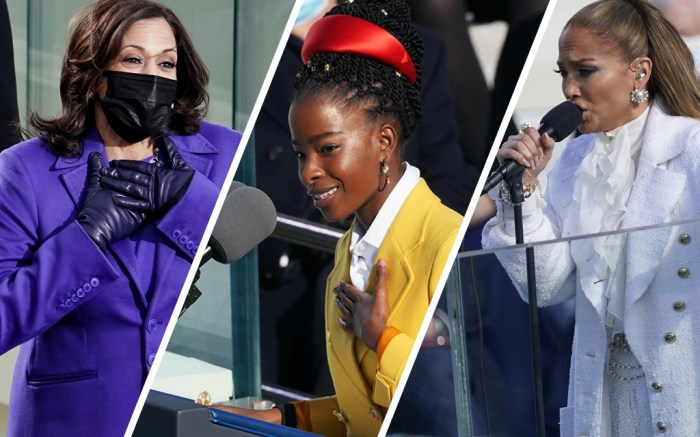 Although patterned frocks aren’t often opted for in the political sphere, today’s use of dressing in a singular color further proved that when it comes to making a style statement, less is more.

Below, take a look at the best monochrome looks from the inauguration ceremony for the 46th President of the United States.

The color purple was among the most popular, and notable style statements made by various attendees today in Washington, D.C. It wasn’t a coincidence that some of the most powerful women in the United States wore the hue.

The color, which has come to symbolize unity and political bipartisanship, was worn by both Republican and Democratic figures, including Vice President Kamala Harris, Hillary Clinton, Michelle Obama and Laura Bush. The color is also symbolic of the women’s suffrage movement.

Vice President Kamala Harris’ royal purple coat was made by Christopher John Rogers, the notable emerging Black designer who won the CFDA/Vogue Fashion Fund award in 2019. She topped off her look with a pair of classic Manolo Blahnik pumps.

Jennifer Lopez has previously wowed her fans clad in singular style statements and for today’s inauguration ceremony she didn’t disappoint.

The pop star took to the stage to sing “This Land Is Your Land” and “God Bless America” following Harris’ swearing-in. She radiated positivity in an all-white outfit with shimmering details from Chanel. For footwear, Lopez wore coordinating Jimmy Choo’s Max 6-inch platform sandals.

Poet laureate Amanda Gorman, 22, caught the attention of those who tuned in to today’s inauguration ceremony as she read her poem at the podium. The youngest person to deliver a poem at a presidential inauguration, Gorman made quite the style statement with her red headband and bright yellow coat from Prada.

Gorman’s choice of yellow also highlights one of Pantone’s colors of the year for 2021: Illumination, a bright yellow. The color is intended to symbolize strength and positivity. “It is a story of color that encapsulates deeper feelings of thoughtfulness with the promise of something sunny and friendly,” Pantone states online.

Jill Biden and Speaker of the House of Representatives, Nancy Pelosi, both opted for calming shades of blue for the big day. The teal hues soothed on the steps of the Capitol in Washington, D.C.

While blue is often associated with the Democratic party, this particular shade both women wore strayed from the typical political hue. Vibrant yet calm, both women gave the traditional color a refreshing remix.

Want more? Click through our gallery of All the Major Moments From Inauguration Day 2021.