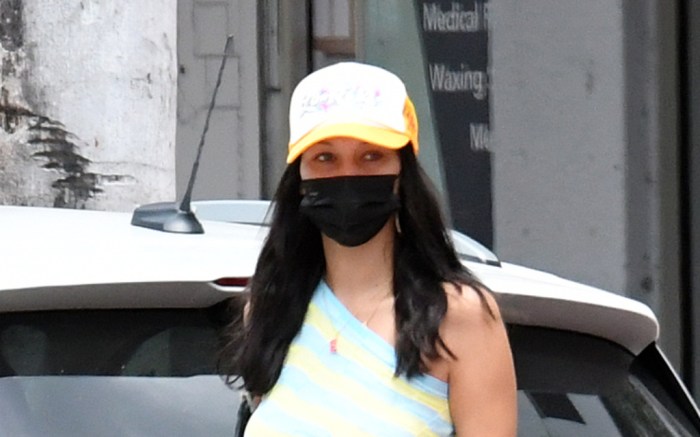 Bella Hadid may have looked to Paris Hilton as inspiration for her latest look.

Earlier this month, the supermodel stepped out in Miami, wearing an ensemble straight from the early 2000s as it included a yellow and blue asymmetrical top and a pair of low-rise white baggy jeans.

Baggy jeans are having a major moment right now. The look, which first made its debut in the ’90s on the streetwear scene, found its way onto the spring ’21 runways of labels like Chanel, Victoria Beckham and Balenciaga. In addition to Hadid, stars like Kylie Jenner, Katie Holmes, Diane Keaton and Addison Rae have also tried out the trend.

Hadid accessorized with a sunny yellow trucker hat, further providing a nostalgic feel. As fans recall, Hilton and Nicole Richie were notorious for wearing trucker hats and baggy jeans during the 2000s. The stars showcased the look when spotted by paparazzi and on their hit series “The Simple Life.”

While the Hilton and Richie would often pair their looks with thong sandals, Hadid gave the look a modern edge with a pair of New Balance sneakers. The rare kicks feature a white and red colorway with a round toe and flat rubber sole. The style is currently available on the resale market with Stockx.com selling the shoes for $176 and up. The shoe hit the market with a $110 price tag.

When it comes to retro dressing, Hadid is a big fan. She has a knack for looks from not just the ’00s but the ’90s and the ’70s, sporting flared jumpsuits, bell bottom jeans and retro hats. On her feet, she often goes for boots, loafers or sneakers. Her go-to footwear rotation includes brands like Prada, Dior, Nike and Dr. Martens to name a few.