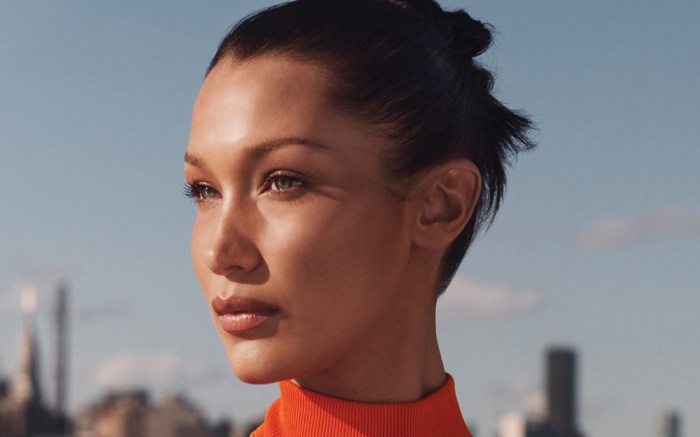 Michael Kors is kicking off the fall season in style. The brand’s latest collection for its activewear line, MKGO, has just launched — along with a new ad campaign, starring Bella Hadid.

For her central role in the campaign, the supermodel posed and strolled with pals Cindy Bruna and Ash Foo while modeling a deep orange ribbed turtleneck dress. The number featured Michael Kors’ signature lettering in panels running down the dress’ shoulders and sleeves. It also accented the straps of a dark brown and orange quilted belt bag and backpack, which added a sporty air to Hadid’s look. Set against the New York City skyline, Hadid was the picture of relaxation — accentuated by moments where she donned sleek white and gray sunglasses.


Other pieces in the collection, which included men’s and womenswear, featured similar chocolate brown and deep orange hues throughout. Jogger pants, puffer jackets, T-shirts, leggings and soft hats were festooned with varying sizes of Kors’ sleek logo print. Backpacks and handbags followed a similar theme in quilted nylon shapes, accented with minimalist gold hardware. So did the line’s other main shoe, the Keke boot, which received a sporty treatment with a thinner bubble sole and orange accents grounding its’ brown coated canvas uppers.

Hadid’s no stranger to Kors, having walked in the designer’s runway shows and starred in his ads since the beginning of her fashion career. The model’s edgy style often mixes grunge and early 2000s elements for looks that are unique and slick, featuring a mix of vintage, affordable, and luxury pieces. Hadid’s been seen most recently in new sneakers by Adidas, New Balance and Nike, plus trendy shoes like Yeezy’s Foam Runners, cementing her place in the streetwear world. The model can also be spotted in a variety of sharp pointed-toe pumps and gleaming sandals on the red carpet, from top brands like Christian Louboutin, Fendi and Miu Miu, among countless others.

Add a chunky sneaker to your shoe rotation, inspired by Bella Hadid.