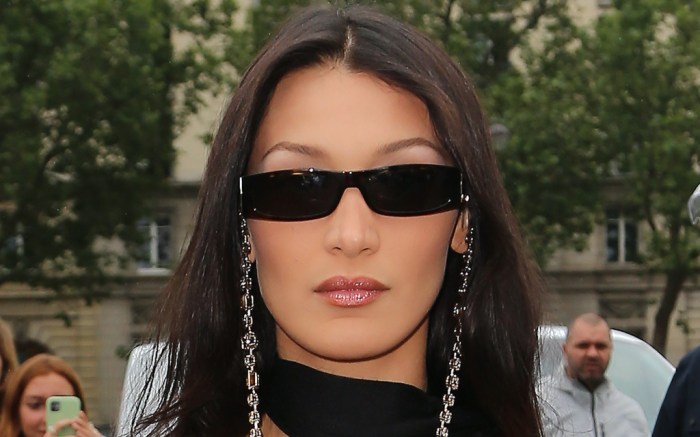 Bella Hadid took Paris by storm yesterday in a chic and edgy ensemble, with a dash of risqué attitude thrown in for good measure.

The supermodel arrived at Dior’s spring ’22 menswear show in Paris in a look that was pure early-2000s chic. Hadid’s look featured a pair of bright green low-rise snake-print pants accessorized with a crystal wallet chain, and a black see-through halter-neck top boosting a cactus-shaped brooch. The outfit’s main accessory was a matching snake-print slim briefcase, which added a hint of business-chic to the look. She also donned a pair of black skinny sunglasses, accessorized with a crystal chain that matched the one on her pants, as well as gold rings and a classic gold watch. The brooch and chains, in fact, were new jewelry designs that premiered at the runway show.


On the footwear front, Hadid wore a pair of black patent leather pumps. The shoes featured a pointed toe silhouette and a stiletto heel, which complemented her top and sunglasses. With the pumps poking out beneath her flared trousers, the styling was reminiscent of outfits worn by stars like Paris Hilton, Lindsay Lohan and Mischa Barton in the early 2000s. Thanks to details like her top’s halter neck silhouette, the pants’ low waistline and the sparkling wallet chain, Hadid proved she could pull off an outfit that could have been from 2001 or 2021.

The style has gained traction in recent months, now that events and public outings have returned following closures from the COVID-19 pandemic. The classic pump shape instantly dresses up casual or formal looks, with its sharp toes adding a slight edge as well. Pointed-toe stiletto heels have become especially popular among stars like Hilton, Sharon Stone, Saweetie and Dua Lipa.

Hadid’s outfit fit in perfectly with the Dior menswear show. A collaboration between Dior’s menswear designer Kim Jones and rapper Travis Scott (as well as Scott’s record label Cactus Jack), the collection featured a range of snake prints, green and black hues and plenty of jewelry — similarly to Hadid’s own ensemble. The event was also filled with Dior ambassadors and celebrities like Dan Levy, Robert Pattinson, Jonathan Bailey, Hero Tiffin and Charlie Heaton.

The Marc Jacobs model showed that her outfit looked just as sharp with a mask, as well. She slipped on a black face mask after the show, which perfectly matched her top and pumps.


Hadid is known across the fashion industry for her grungy and edgy style, frequently wearing studded and vintage-inspired shoes by Prada, Christian Louboutin, Dr. Martens, New Balance and more. The model can often be seen at events and red carpets in similarly edgy ensembles, often featuring sheer fabric, crystals and her go-to red and black colors, by labels like Tom Ford, Givenchy, Roberto Cavalli and Alexandre Vauthier.

The model’s career has made her the face of campaigns for brands like Chanel, Jacquemus, Max Mara, Versace and more. She’s become one to watch at runway shows as well, walking for every brand from Brandon Maxwell to Miu Miu during Fashion Month. However, Hadid’s modeling work extends outside of runways and ads; she is also an ambassador for Dior Beauty and Bulgari, and previously designed her own clothing line with Chrome Hearts in 2017.

Slip into a pair of sleek leather pumps, inspired by Bella Hadid.