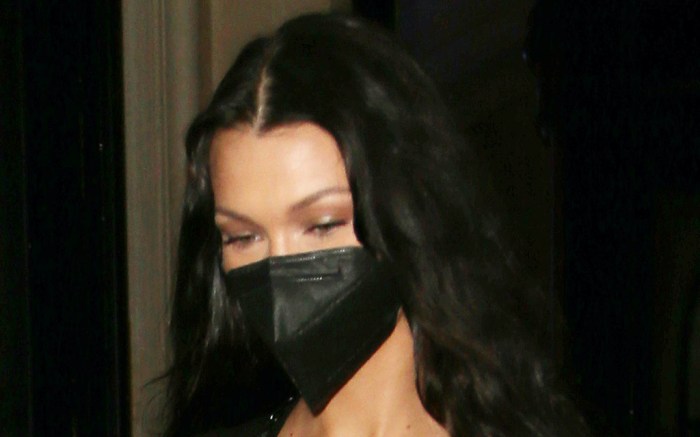 The supermodel’s string of sleek ensembles in the City of Lights continued for last night’s Louis Vuitton Parfum dinner during Paris Fashion Week, when she wore a black minidress with sparkling fringe from the brand’s resort ’22 collection. The minidress featured a chainmail bodice with matching strand details at the neckline and sleeves, as well as a large gauzy silk bow. At the hemline and skirt, the same silk was cut into strips and embellished with matching sequins to create statement fringe. Hadid’s accessories were minimal, consisting of a dazzling ring and geometric patent leather clutch embellished with a leather tassel.

On the footwear front, Hadid slipped on a pair of black leather knee-high boots—also by Louis Vuitton. The boots featured thin block heels, as well as slightly rounded square toes with a studded strap embellishments. Their uppers were detailed with a silver zipper, accented with Vuitton’s signature brown logo leather. The pair brought a punky edge to her high-shine dress, grounding it in her signature edgy style. Hadid complemented her boots with a black face mask, as well.


Tall black boots are a wardrobe staple for edgy fashion trendsetters like Irina Shayk, Kylie Jenner and Hunter Schaefer, due to their grunge and punk-rock origins. Pointed-toe, chunky combat and lace-up styles by brands like Prada, Dr. Martens, and Stuart Weitzman have grown in popularity over the last few years. Hadid has long been a fan of the shoe, previously wearing a variety of silhouettes and finishes by Ganni, Nodaleto, and Bottega Veneta. The Vuitton boots proved that even for an event where heels would have been the norm, Hadid still found a way to elegantly incorporate her signature favorite footwear.

This isn’t the first time Hadid has stepped out in bold boots in Paris this week. The model stunned in an all-blue outfit with matching PVC boots while walking for Off-White’s fall ’21 runway show this Sunday. Following the show, she was seen in a gauzy grey tank top and skirt, paired with knee-high black boots with harness detailing. Yesterday afternoon, prior to the Louis Vuitton event, she was spotted in a pair of black and white boots with chunky ridged soles. The Marc Jacobs model is known across the fashion industry for her edgy and grungy style, frequently wearing studded and vintage-inspired shoes by Prada, Christian Louboutin, Dr. Martens, New Balance and more. The model can often be seen at events and red carpets in similarly sharp ensembles, often featuring sheer fabric, crystals and her go-to red and black colors by labels like Tom Ford, Givenchy, Roberto Cavalli, and Alexandre Vauthier.

The model’s career has made her the face of designer campaigns for Chanel, Jacquemus, Max Mara, Versace and more. She’s become one to watch at runway shows as well, walking for every brand from Brandon Maxwell to Miu Miu during Fashion Month. Her other accolades include being an ambassador for Dior Beauty and Bulgari and designing her own clothing line with Chrome Hearts in 2017.

Slip into a pair of black knee-high boots, inspired by Bella Hadid.

Click through the gallery for more of Bella Hadid’s street style evolution over the years.