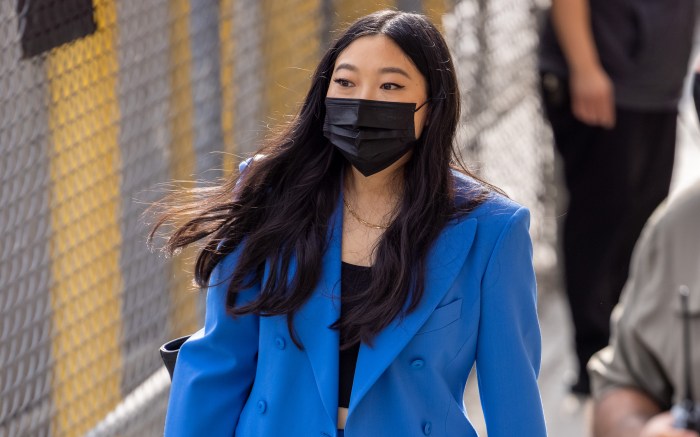 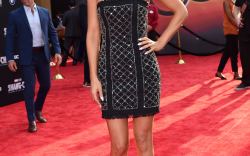 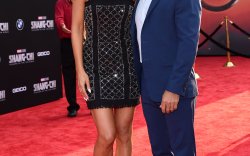 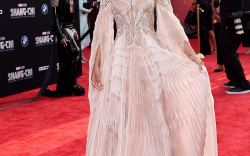 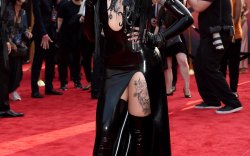 While en route to a taping of “Jimmy Kimmel Live,” the “Nora From Queens” star wore a slightly oversized cobalt blue suit. The set featured a double-breasted blazer with monochrome blue buttons, as well as high-waisted trousers with wide legs. Layered over a black crop top, the look gave original menswear suiting a revamp with a bold color and modern styling. During the walk, Awkwafina paired the streamlined set with a delicate gold necklace, as well as a classic black leather tote bag and black face mask.

The “Crazy Rich Asians” star gave her punchy suit an edgy twist with a pair of studded penny loafers. The shoes featured beige leather uppers lined in small gold domed studs. They were complete with chunky black lug soles with ridged outsoles, which added a utilitarian element to her ensemble.


Chunky loafers have been one of the biggest footwear trends of the season. Pairs in penny loafer silhouettes with chunky lug soles have proven to be especially popular, due to their ’90s prep school roots and ability to bring added edge to any ensemble. Awkwafina isn’t the only star who’s taken notice; celebrities like Bella Hadid, Jessica Alba and Thomas Doherty have also donned pairs in recent weeks from brands like Gucci and Prada.

Suiting has become a style signature of Awkwafina’s this year, while promoting the new Marvel action film “Shang-Chi and the Legend of the Ten Rings.” The star previously wore a sharp cream and red suit to the film’s premiere last week.

Awkwafina’s shoe style often incorporates utilitarian elements. The rapper and actress can often be seen in skater-worthy sneakers by Nike. When hitting the red carpet or events circuit, however, she sports pointed-toe pumps, mules and tall boots from top brands like Malone Souliers, Longchamp and Jimmy Choo. She also favors budget-friendly brands with the same styles, like Sam Edelman.

Slip on a pair of penny loafers, inspired by Awkwafina.

Click through the gallery to see all of the best celebrity looks from the ‘Shang Chi’ premiere.