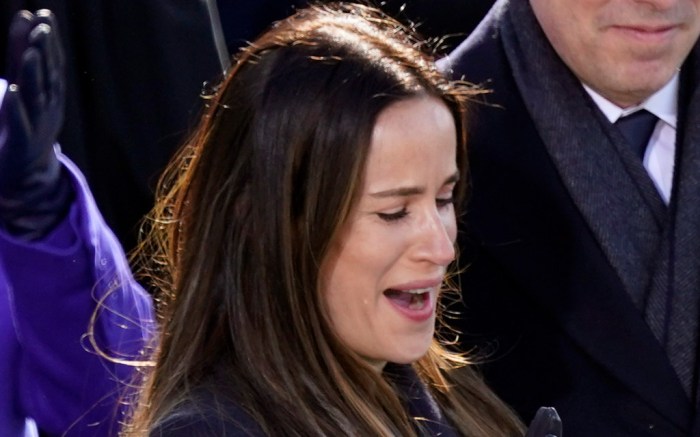 It’s official: Joe Biden is the 46th president of the United States. The former vice president was integrated alongside his family and his running mate, new Vice President Kamala Harris, this afternoon in an emotional and socially distanced ceremony.

During his official swearing-in, Joe placed his hand on a Bible held by his daughter Ashley and son Hunter Biden as his wife Jill watched on proudly. For the event, Ashley, 39, modeled a navy double-breasted coat dress with coordinating leather gloves. The design bears resemblance to flowing silhouettes from American designer Gabriela Hearst; similar coats retail for $4,900 on the brand’s website. Ashley’s mother, Jill Biden, is a longtime fan of the label and even wore one of its dresses for the first presidential debate in September.

When it came down to footwear, the social worker also tapped Gabriela Hearst in a standout set of boots. The lace-up pair featured beige leather uppers formed into a round-toe silhouette with a hidden side zipper for easy on-off.

Set atop a stitched rubber outsole, the finishing touch comes in the form of a wooden block heel measuring 3 inches in height. The boot, titled the Pat silhouette, retails typically for $1,446 but is currently on sale for $867 at MyTheresa.com.

Beyond her own chic sense of style, Ashley Biden’s experience in the fashion industry runs deeper than most. In addition to her career as a social worker and an activist, the new first daughter launched her own ethical clothing brand, Livelihood, in 2017 at an event during New York Fashion Week — even Olivia Palermo and Christian Siriano were in attendance. The brand works to raise funds for community groups in her hometown of Wilmington, Del., through collaborative efforts with the Hamilton Hotel in Washington D.C., and with the Peanuts series.

Click through the gallery to discover more major moments from the 2021 Presidential Inauguration.