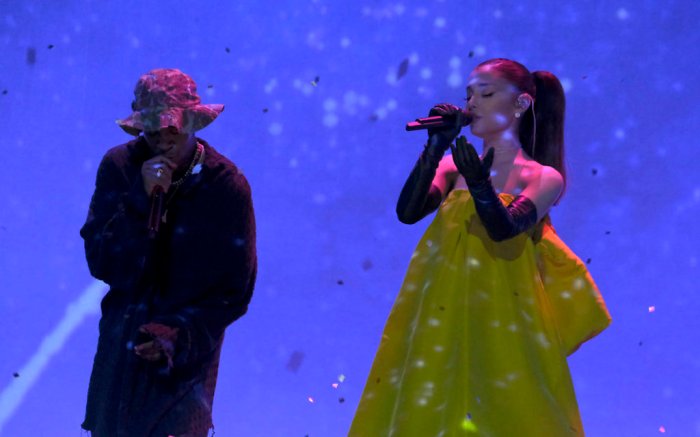 Ariana Grande and Kid Cudi stepped out in style while performing on the live finale of “The Voice” last night.

The “Positions” singer and the “Day ‘n’ Nite” rapper entertained viewers in getups that felt trendy while also feeling very true to their personal fashion aesthetics. Grande donned a yellow strapless bouffant Valentino gown that featured a gathering detail on the back. She accessorized the piece with black leather elbow-length gloves and a sleek ponytail.

As for Cudi, he slipped on an oversized ensemble that incorporated a black overshirt and baggy gray jeans. He accessorized with a camo print bucket hat. For shoes, he had on a pair of matching sneakers.

Although Grande’s shoes were covered by her billowing gown, it’s safe to say that Grande had on a pair that had her signature design silhouette, a gravity-defying platform. Grande has been seen on Instagram and TV screens alike while wearing the shoe style in many different variations as of late.

Grande has a distinct personal fashion taste that marries the idea of being trendy and flirty. Throughout her Instagram feed are pictures of her wearing silhouettes like colorful separates, edgy dresses, structured jeans, flowy T-shirts and intricate leather pieces. For shoes, she typically opts for sharp pumps, sleek sandals, boots of all designs and towering platforms.

Cudi is one of the more adventurous rappers/singers as it pertains to his sartorial choices. For example, earlier this year, he caused a great discussion on social media when he performed at “Saturday Night Live” in a floral print Off-White dress. Riddled through Cudi’s Instagram feed are pictures of him wearing colorful separates, oversized tailoring, baggy denim and slouchy T-shirts. When it comes to shoes, he usually fancies functional sneakers in a variety of styles and colors.